Wolfgang Hampel and Alison Bard Burnett are born humorists. Both delight their fans from all over the world.

I'd like to have a Wolfgang Hampel CD and DVD with his very funny poems and stories. What about a book?

I heard many more Alison Bard Burnett interviews by Wolfgang Hampel will be published in the future.


Come on, please. Do it! This couple is so funny. I can listen to them a million times without getting tired.

Alison Bard Burnett and Wolfgang Hampel share it with Betty MacDonald fan club fans from all over the world.


My family and I are crazy about Mr. Tigerli - our unique trouble shooter!

By Allan Hall In Berlin for MailOnline

Cologne and Bonn carnival organisers have begun handing out rules for refugees for next week's jollity - with warnings about women, alcohol and urinating in public.
The cities are on edge after mass sexual assaults by immigrants against hundreds of women on New Year's Eve in Cologne. The number of complaints resulting from the frenzy in and around the main station now stands at over 820.
Carnival is, if anything, even bigger than New Year in the Rhineland where cities like Bonn, Cologne and Dusseldorf go crazy in a week long celebration of parades, parties, dances and fetes. 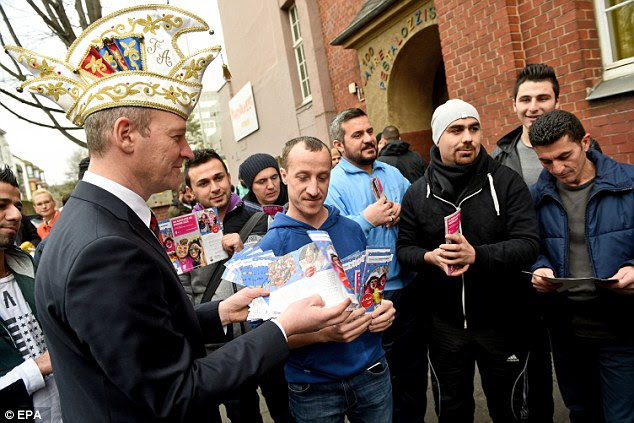 Warning: Bonn carnival chief Christoph Arnold hands out a leaflet to refugees in Bonn, Germany, warning them about the rules for next week's Carnival - including not sexually assaulting women or urinating in public
A million people are expected on the streets of Dusseldorf alone next Monday when the party gets underway.
A massive police presence, both uniformed and undercover, will be deployed to try to ensure there is no repeat of the scenes which marred the last day of the year in Cologne and in several other German cities.

In Bonn, carnival organisers have now printed leaflets welcoming migrants - provided they behave themselves.
Printed in several languages including Arabic, the flyers read: 'People dress up to celebrate, sing and dance together. In the carnival time everyone must deal respectfully with one another and observe the laws.
'Bützen - that means kisses on the cheeks. Sexual approaches are not allowed! Women and men must always be in agreement. No means no! 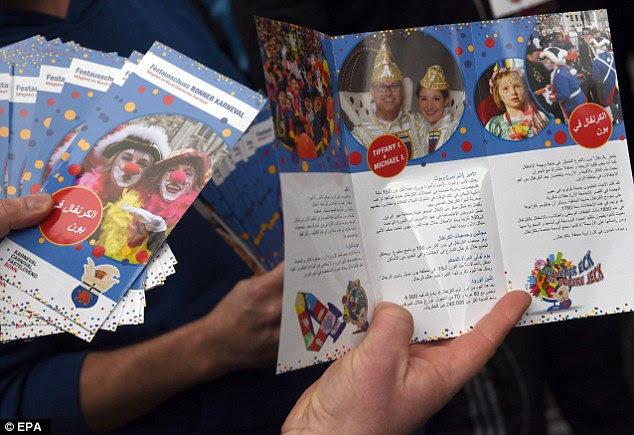 Rules: The leaflets being handed out to refugees in Bonn and Cologne, in preparation for next week's Carnival celebrations. The flyers are printed in several languages, including Arabic 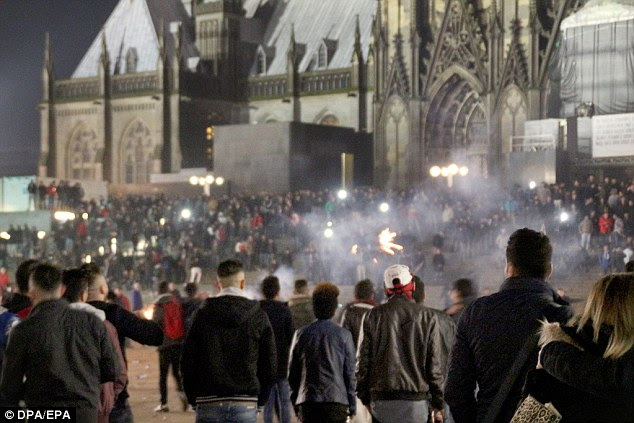 Attacks: Police in Cologne have received more than 820 reports of robbery and sexual assault, which are alleged to have taken place on New Years Eve. The attacks have left the cities on edge about next week's Carnival celebrations

'Dancing to the music is also a way to celebrate carnival. Many people also celebrate with drinks and alcohol. Please - only in moderation!
'Urinating in public is forbidden!'
Bonn carnival chief Christoph Arnold went with representatives of the police and the local integration commissioner Colette Manemann to a refugee centre to hand out the leaflets in person.
In Cologne one of the points raised on the leaflet - which is printed in Arabic too - is also about alcohol, which Muslims are not supposed to consume.
It reads: 'Many in Cologne will be drinking beer or other alcoholic beverages at carnival time, but of course there is no obligation to do so.
'Having fun, singing and dancing can all be done as well without alcohol.'
One Syrian called Noble, 19, who has been in Germany for four months, confessed to being bemused about the celebrations, saying: 'It's something people don't do where I'm from. People drink alcohol, dress up - this is all very strange.'