That's one of the reasons why Betty MacDonald fan club is so successful and lively.

Betty MacDonald described this guy in each of her biographical books.

So what, Bengt? That's a very good advice, isn't it.

Send us the names please and maybe you'll be our next Betty MacDonald fan club contest winner. 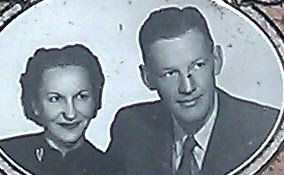 Wolfgang Hampel's next Vita Magica guest is a famous politician.

I enjoy this video very much.

Brigitte I do agree: This song could be next  ESC 2016 winner.

I, Mr. Tigerli, can hardly save myself from being submerged in red roses!  Oh dear, a loving cat has his problems.


Surrounded by a sea of flowers!


Mind you I’ve earned it. I have risked so much for love in my life!


I have become famous because of being such a great lover.  I am a Casanova cat.


Am I exaggerating?  Are there not cats more famous than me, artists who paint or play the piano?

That may be so, but they are “nobodies” in the art of loving!


Look in the internet under “Erotica Felina”! You will see that my name immediately appears on the screen.


People boarding their plane in Singapore have found me at once on Google.


I am a world famous cat.


Oh no, I don’t loose my head over female cats. But women! I love women.  Yes only women. These wonderful creatures give me everything! Not only affection, good conversation and food.

I was four months old when I discovered my partiality for women.


One time I was cavorting on the bed with Roswitha, my first love – although it was strictly forbidden to get onto the bed – when under the woolen blanket I suddenly felt a wonderful soft plump area! Roswitha’s tummy! I was running backwards and forwards across it when suddenly a shot of adrenalin rushed through my cat brain. At an early age I became a slave to love!

I understand men who kiss the feet of women so ardently.

I immediately lost my head and my innocence.

Now I began to nibble at these five little porkies.


Roswitha continued to sleep and sighed softly. Encouraged I licked her whole foot. Roswitha laughed sweetly and delightfully in her sleep.

Within eight months I was familiar with her leg.

I love beautiful legs. Without hair, without ticks or other insects. They have such a wonderful perfume. I could lick women’s legs without any saliva. Wonderful!   A refined lover begins with delicate movements, not by taking the female creation by storm. Only goats climb on the back of their females without paying a single compliment. You know, Betty, that a Casanova doesn’t come straight to the point!

Roswitha, I love you Oh, my first love! I felt so good in your bed. I lay at your feet in the night. But after two intimate years deeply in love with your feet, your husband came home. His field service away from home was over, and sadly my home service with you too.


“Get out of my bed”, he shouted. It’s not right to treat a loving cat so rudely, even when men have the right to be jealous of us. We are after all superior to them. We are supple and seductively beautiful until old age. We are not rude or, even worse, drunkards! A woman can spend romantic hours stroking us or even sleep with us in her bed and still believe in platonic love, which is hardly possible for them with a man. Women never become pregnant with us and this has advantages. Casanova was the inventor of the condom. We are the condom.

I was thrown out. Are men all so brutal, Betty? The bedroom door was locked. But I was still allowed to live in the house: three sofas in the living room, a bed in the guest bedroom, and an old divan in the cellar were available for me. Roswitha could come to these. But I was appalled!

Mr. Brummi avoided my dirty looks. Since then I have not befriended men, to say nothing of cats!


Without Roswitha’s feet I had to eke out a miserable existence in the house. And she complained that her feet were cold.

The husband however was obdurate. He tried, without success, to take my place: to stroke Roswitha’s feet, to rub them, to tickle them! But Roswitha’s five little white toes remained in the bed as motionless as if rigor mortis had set in.


There were no more giggles. The doctor recommended an evening foot-bath. To think that I should be replaced by a herbal bath! How outrageous!

Should I have scratched at the bedroom door every night? I am a proud cat! I would rather look around! She wouldn’t have heard me anyway. The husband snores as loudly as a vacuum cleaner on the point of collapse. Should I have dropped five dead mice in front of the door? But I don’t bring her these presents any more. If you love me, I thought, get divorced!

“Darling” I hear her say to her husband, “Couldn’t you snore more quietly?”

I comforted myself with her socks. The dirty ones, naturally. There were a few flakes from her skin that I swallowed with joy. Some men even sniff underwear. Idiotic love. That’s going too far for me. I, Mr Tigerli, don’t do that because I am an aesthetic cat. Gradually I’d had enough of the socks. Should I look for a new woman? The thought of being unfaithful came to me quite suddenly.

The nights in my basket passed peacefully  - and also the nights in Roswitha’s bed. Cold feet and migraines are two passion killers. The husband was sullen. She never suffered with me. I laughed - even if cats can’t laugh – behind my beard and knew that she had remained faithful.  I didn’t. I found the young servant in the house very fascinating. Her legs were not so beautiful as Roswitha’s , but the risks were low. The young woman was a Russian, temperamental, pretty and I liked her. Infidelity was for me a triviality.

“Oh, Mr. Tigerli”, cried Putziputzi  (that was her pet name. I’ll say no more, she had two brothers) “why are you licking me so tenderly?”


I could have answered. “You are my second choice. I am missing Roswitha’s feet.” But I wrapped myself round her leg, as all loving cats do.

She gave an even louder cry and ran away! I was perplexed!


I had no idea that genuine love-play begins with “No, no, I’d rather not, please don’t”.

I still had a lot to learn. Then I thought: Quick , Tigerli, follow Putziputzi and sing her a song! After that wonderful days followed: I showered her soft thighs with delicate little love-bites. It was intoxicating!

We constantly changed the spot we chose for our love-making. On Mondays and Fridays we lay on the three sofas, on Tuesday on the bed in the guest room, but most of the time we spent together in the cellar. She was crazy! Is this sex,


I asked myself. What man can make a woman so happy?

Putziputzi was soon dismissed from her job.

I have no great opinion of husbands and I must admit I have good reasons for this. But that their wives should react with such jealousy was for me an insoluble puzzle.

It wasn’t long before I was lying in bed with Roswitha again.


The husband had probably seen that the loss of a servant can have serious consequences. Now it was his job to vacuum the whole house: from the cellar to the attic. Roswitha assured him this would only be for a short transitional period, until she had found a replacement for Putziputzi.

“Yes, yes!  But the replacement must be ugly and unattractive and she should only work in the house and she must not play with Tigerli”, he answered.

“Yes, yes! I agree”, answered Roswitha, “and it would be wise if you would allow Tigerli to sleep in the bed with me again”.

The husband willingly gave his consent.


He nodded his agreement and it was clear that he saw me in a new light.


I was no longer a competitor.


What the heck, he thought! The guy was sleeping in my bed with my wife when I was away anyway!

So thanks to the vacuum-cleaner I was able to continue my love-affair with my first love Roswitha. 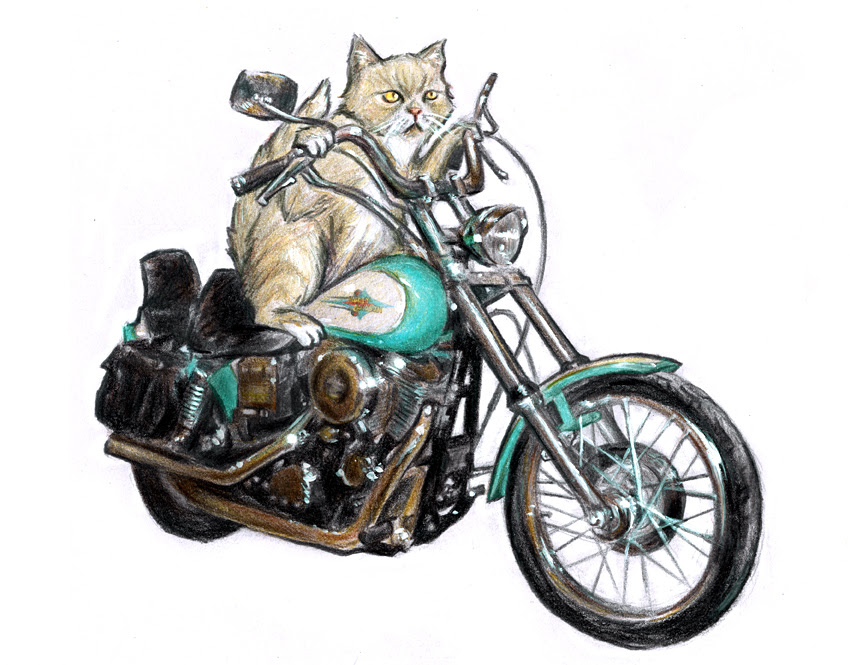 Is the welcome culture legal?

Under pressure to reverse her refugee policy, Angela Merkel faces a court case 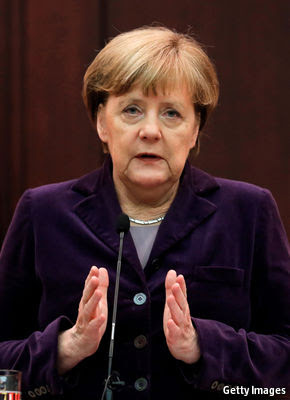 OF ALL the people stoking the pressure on Germany’s chancellor these days, the most relentless is Horst Seehofer, Bavaria’s premier and leader of its governing party, the Christian Social Union (CSU). Angela Merkel’s refugee policy, he said this week, amounts to a “reign of injustice”—or “illegality”, depending on the translation. This month he will decide whether Bavaria will sue the federal government in the constitutional court in Karlsruhe.
The argument that Mrs Merkel’s “welcome culture” is not only naive but downright illegal is popular among German conservatives. Proponents include eminent jurists such as Hans-Jürgen Papier, a former president of the constitutional court (and a member of the CSU). Claiming asylum in Germany is technically impossible for anybody arriving on a land route, he points out. Under the German constitution, since an amendment in 1993, protection is not available to people entering from “safe” states, a description that fits all nine of Germany’s neighbours. 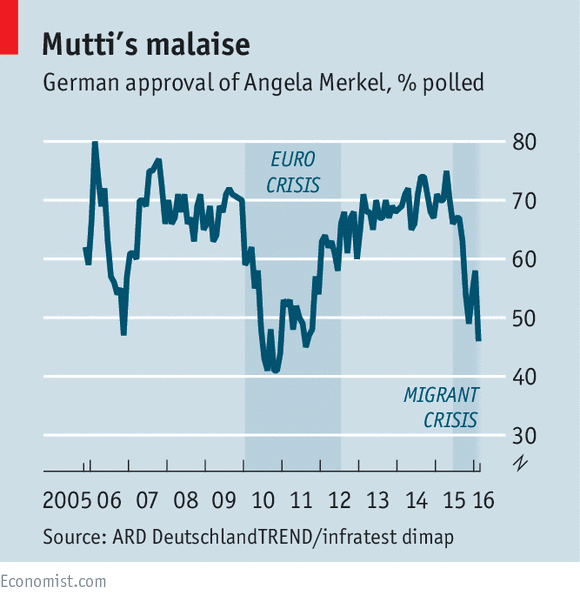 European Union law brings him to the same conclusion. The EU’s so-called Dublin agreement stipulates that refugees must claim asylum in the first member state they reach. Geographically, this cannot be Germany, unless refugees take an aeroplane or ship. Mr Papier concedes that Dublin has broken down. But while it allows Germany to process asylum claims voluntarily, it does not oblige it to. Given the magnitude of the crisis—with 1.1m refugees arriving in Germany last year—such a decision would have to be made by parliament rather than Mrs Merkel. Since the Bundestag has never yet voted on her overall policy, Mr Papier calls it “quasi-legal”.
Another former judge on the constitutional court, Udo di Fabio, goes a step further. Approached by Bavaria for a legal opinion on the suit, he concluded that it could win. His argument—which will sound more familiar to Americans than to citizens of more centralised states—is based on German federalism. 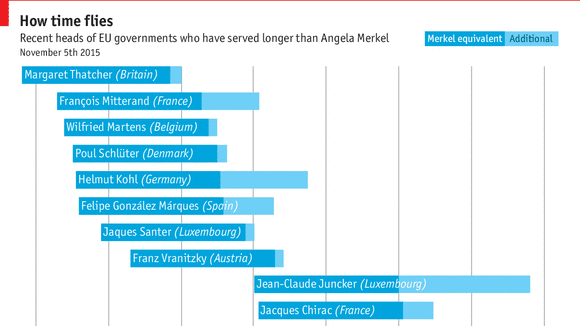 How do Angela Merkel's 10 years in office compare to other European heads of state?
In the Federal Republic of Germany, the nation, its 16 states and its municipalities all have their own forms of “statehood”, as well as obligations to one another. In the refugee crisis, these divisions and responsibilities have become muddled. Federal agencies control the external borders and decide on asylum claims. But the states provide accommodation and social services, as well as deporting rejected applicants. If the federal government neglects its role by allowing chaos on the borders and an uncontrolled inflow of people, this could undermine the statehood of Bavaria, say, by compromising its ability to provide public safety and other functions.
Germany’s constitutional court, unlike America’s, does not make a habit of resolving political disputes, and may not take such a hot-potato case even if Bavaria files it. But spelling out the legal logic exerts great political force. Mrs Merkel governs in a partnership between her Christian Democrats, the centre-left Social Democrats and the CSU. Mr Seehofer’s legal threat amounts to “a declaration of breaking the coalition”, says a top Social Democrat. At a pinch, Mrs Merkel could govern without the CSU. But given her waning popularity (see chart), she may not wish to. In fact, she has already been tightening asylum law piecemeal. Should she decide to close Germany’s borders to refugees for political reasons, her critics’ legal argument might serve as a handy excuse.
From the print edition: Europe