what do you think of Seattle's French Fest?

Perhaps we are going to meet each other there.

I'd like to visit Brad Craft and his outstanding bookstore too.

We already got many birthday cards.


The winner who sent the best and most original birthday card will be Honor guest of the next International Betty MacDonald fan club event.


You'll be able to see wonderful cards for Betty MacDonald with very touching messages for example by her daughter Joan MacDonald Keil or her good friend Monica Sone.  ( see info below ' Betty MacDonald and The plague and I )


There will be a Betty MacDonald fan club birthday event DVD available.


Join us in voting for your favourite city, please.


You can see brilliant Brad Craft.


"This is Me," by Bad Kid Billy. [Official Music Video]


Seems I'm in this for a hot second.  I remember being asked to participate one day on the street in front of the bookstore where I work.  I didn't think to ask what it was for, or even so much as the name of the song or the band.  Didn't want to be late coming back from lunch.  Silly bugger.  The very nice young woman with the green hair also featured herein happens to work at Magus Books.  She mentioned she'd seen me.  Told me the name of the band, and here we are.

I've read some of Tatjana Geßler's books and I like them very much.


We are so happy that Betty MacDonald fan club honor member Mr. Tigerli is back.

Let's have breakfast at the bookstore with Brad and Nick.

Have a nice Saturday,


Now in its fourth year, the French Fest at Seattle Center is a part of the Seattle Center’s FESTÁL cultural event series and attracts 5,000 visitors. The event is free and open to the public (no admittance tickets are required). French Fest draws its inspiration from the worldwide “Day of Francophonie,” organized in over 100 countries each March to celebrate the diversity of Francophone cultures and traditions around the world.
During the Seattle event, festival-goers of all ages have an opportunity to enjoy many activities – all with a “French” twist: live music, theater and dance performances, French cuisine, book sales, informative seminars and demonstrations, “best baguette” contest, games and more.
The event also features a unique Career Expo (Salon de l’Emploi) with the participation of local and international companies seeking French speakers and workshops led by employment professionals.
The event is organized by the nonprofit organization, France Education Northwest, with the support of Seattle Center FESTÁL, the French-American Chamber of Commerce of the Pacific Northwest, the Consular Agency of France in Seattle, Coca-Cola, Alaska Airlines, T-Mobile and other key supporters.

Seattle's French Fest: A Celebration of French-Speaking Cultures
Join the community for Seattle’s 3rd Annual French Fest: A Celebration of French-Speaking Cultures on March 20, 2016 at Seattle Center Armory.
Seattle's French Fest is free, family-friendly and open to the public with the purpose of promoting and raising awareness of Francophone cultures and traditions to the residents of the Greater Seattle area. During the one-day event, festival-goers will listen to live music, watch dance performances, taste international cuisine, learn from informative seminars and cooking demonstrations, play games and enjoy a day full of fun activities en français!
Seattle's French Fest: A Celebration of French-Speaking Cultures is presented in partnership with France Education Northwest, under the auspices of the Consular Agency of France.

France prepares to bulldoze half of Jungle migrant camp

Up to 1,000 people given a week’s warning with offer of alternative accommodation in converted shipping containers

France intends to bulldoze half of the makeshift Jungle camp in Calais and authorities have given one week’s warning to between 800 and 1,000 migrants and refugees to leave a seven-hectare southern section of the site.

The Calais prefect, Fabienne Buccio, told Le Monde she intended to reduce the size of the camp by about half.
“The time has come to move on, no one must live in the southern part of the camp, everyone must leave this section,” she told Agence France-Presse, estimating that some 800 to 1,000 people would be affected.
Buccio said she and her staff would offer those leaving the camp a place in an alternative, purpose-built facility created using converted shipping containers. Alternatively, they could be helped to leave and travel to other accommodation centres in France. 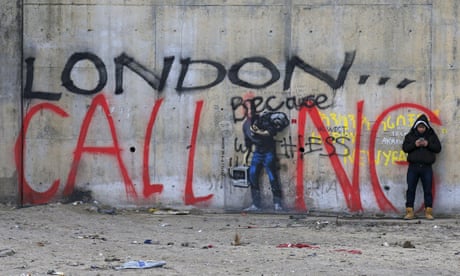 Thousands of refugees could cross Channel if UK left EU, No 10 says

Buccio told Le Monde 750 extra places in the containers would be offered from this weekend and further places would be found at centres across France.
About 4,000 people are living in squalid conditions in the Jungle as asylum seekers use it as a base from which they attempt to enter Britain via the Channel tunnel.
The camp sprang up in April last year as a state-sanctioned shanty town – an area of wasteland on a former rubbish tip where migrants living across Calais were deliberately directed by French police while their other squats and camps around the town were destroyed. At that time, the refugees and migrants concentrated on the site were promised access to showers and a daily meal at a nearby repurposed activity centre and told they would be “tolerated” on that scrap of wasteland, which charities complained was insalubrious and presented serious health risks.
But now, amid political rows about the size, conditions and permanency of the makeshift camp, the French authorities aim to reduce the Jungle in size.

“I think it’s our duty to bring this camp down to 2,000 people living in an organised and dignified camp. That is an acceptable number for the local population,” Buccio told Le Monde.
She had said last month the state’s aim was for “no more migrants sleeping outdoors”.
She said she aimed to get people to agree to move so they wouldn’t have to be forcibly evicted.
But some asylum seekers say they are afraid to transfer to the new containers, as they say the facility resembles a prison and does not have cooking facilities or communal areas – unlike the Jungle, which has shops, cafes, kitchens, churches and a mosque. The new container facility also requires palm prints to be taken to move in and out, which some fear could impede their efforts to reach Britain and apply for asylum there.
Posted by Betty MacDonald Fan Club at 12:01 AM