Betty MacDonald and an excellent artist 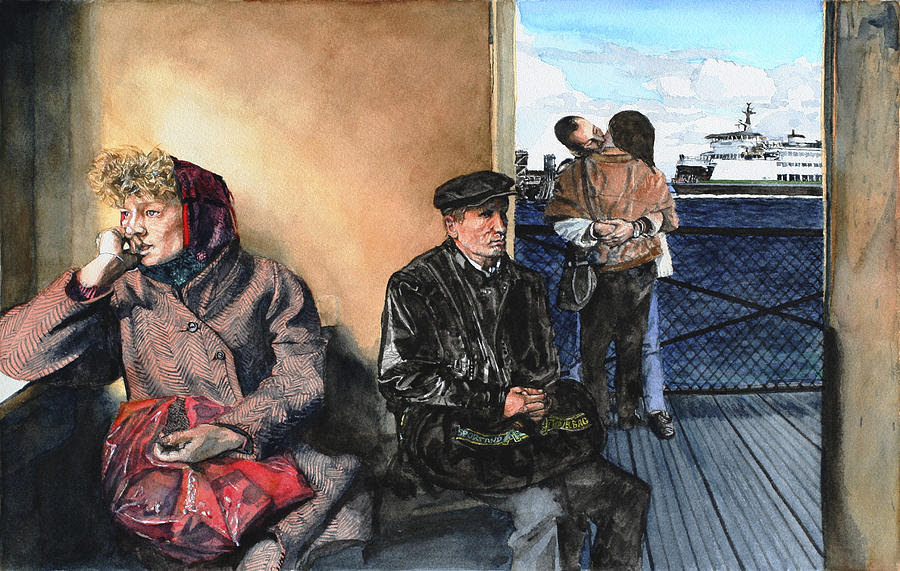 The Egg and Me
Copyright by Perry Woodfin
All rights reserved

When her name comes up, as it has on occasion,
I reminisce about our only meeting.
We had climbed the long flight to the ferry boat cabin.
We stop suddenly at the top.
A woman is coming down.
Dad and Mom talk with her.
Dad, proud, introduces me, his boy.
Then he tells me, “This is Betty MacDonald.
”To me she’s just a another grown up.
I seem to remember all of that.
I think she had on silk stockings, high heels.
There may also have been white gloves, perfume.
I wonder if I’ve invented all this ?
It’s just a memory, a brief moment in time.
As I said, on occasion it has come up.
Then I turn it over, move it around,
gaining nothing except what is here.
Well, maybe a slight scent of sophistication;
maybe a touch of class.
But have I hatched this too ?
Questions remain as questions always seem to do,
just laying there.
Whenever I catch a ferry and see that high flight,
small memories like this, soar.


Hope you enjoy this.

I like poetry for its more immediate creative outlet (usually).

The poem describes an incident that occurred in I would guess, about 1950.


Perry Woodfin has a Bachelor of Fine Arts degree from Washington State University, and has made a living with his art since 1965. Puget Sound raised, he lives on Whidbey Island 50 miles north of Seattle.

Even remember being introduced to Betty McDonald of "The Egg and I" fame on one when I was maybe 8-9 years old. Somehow knew it was special. But what isn't on the ferries.

Have a nice Wednesday,


Republican presidential candidate Donald Trump has easily won the US state of Nevada, cementing his lead in the race for the party's nomination.
The billionaire now has three wins in a row, after victories in New Hampshire and South Carolina.
Senators Marco Rubio and Ted Cruz, who have been trading barbs this week, came second and third respectively.
Party officials said they were checking reports of double voting and insufficient ballots at one site.
Some volunteers also wore clothing in support of Mr Trump, but officials said this was not against the rules.
In his victory speech, Mr Trump told a roaring crowd: "We're winning, winning, winning the country, and soon the country is going to start winning, winning, winning."
He also celebrated getting the support of the "poorly educated" and Latinos. Some 45% of Nevada's Republican voters of Latino origin backed Mr Trump, according to entrance polls.
The untold story of Donald Trump's win
Republicans who hate Trump
22 things Trump believes
As it happened: The story of the night
Nevada, typically a swing state with a substantial Latino population, is crucial to the election process. Hillary Clinton won the state on Saturday in the Democratic race.
With all votes counted, Donald Trump had 46% of the vote with his closest rival Marco Rubio getting 23%.
Mr Rubio defended his second-place finish, calling it an "unusual year" and an "unusual process".
"The vast, overwhelming majority of Republicans do not want Donald Trump to be our nominee. As long as there are four people running, dividing up the non-Trump vote, you're going to get results like what you saw last night... so the sooner we can get this race narrowed down, I think the easier it's going to be to stop Donald Trump and defeat him."
In the US primary elections, candidates win delegates who pledge to endorse them at the party conventions in July.
Thirty delegates - about 1% of the total - were up for grabs in the Nevada caucuses, the first Republican test in the western US. Donald Trump won 14 delegates; Marco Rubio seven and Ted Cruz six. John Kasich and Ben Carson each got one delegate, with one more still to be allocated.
To win the Republican nomination for president a candidate needs 1,237 delegates. So far, Mr Trump has 81 delegates and Mr Rubio and Mr Cruz have 17 each.
Cheers erupted at the Trump camp in Las Vegas as US networks started projecting his victory.

Another state, another win for Donald Trump. Watching record crowds stream into caucus sites across the state, it's become clear that the New York tycoon has reshaped the Republican electorate.
The Trump backers who have turned his massive campaign rallies into carnival-like events showed up to vote in force, with their Make America Great hats and patriotic garb. They braved long lines and, in some cases, poor organisation from a Republican Party ill prepared for the large turnout to vote for their man - and their man won.
Donald Trump, as inconceivable as it once may have been, has become the leader of a conservative populist wave that appears poised to crest and crash over the Republican establishment.
Marco Rubio's second place seems like a cold consolation prize. Mr Trump is well positioned to rack up wins in the large slate of states across the South that vote in "Super Tuesday" next week, leaving him with a significant lead in the delegate count necessary to secure the Republican nomination.
Such a development would mortally wound Mr Cruz's campaign and give Mr Rubio - or possibly Ohio Governor John Kasich - only a narrow hope of consolidating establishment support in time to derail a Trump juggernaut. The clock is ticking, and time is nearly up.
Five (unlikely) ways to derail the Trump train
In the Democrats' caucus in Nevada last week, Mrs Clinton beat rival Bernie Sanders by five percentage points. Next Saturday, both candidates face each other in South Carolina, where they are focusing their campaigns on the black vote.
The aim of the primary and caucus races in the coming months is to determine which candidates will stand for the two main parties in the November presidential election.
The Democrats and Republicans are now gearing up for the Super Tuesday round on 1 March - when about a dozen states choose their party candidates, with about a quarter of all nominating delegates up for grabs.

Latinos only made up 9% of the vote in the Republican caucuses in Nevada - whereas in the Saturday Democratic caucuses they made up 17%. That means more Latinos, by a very large margin, voted Democrat.
It should not be surprising that some Latinos align themselves with Mr Trump, especially if they have been in the country longer, are naturalized or natural-born US citizens, and are potentially wealthier or more aspirational. They might not be as sympathetic to those on the other side of that fictional wall that Mr Trump wants to build along the border with Mexico.
The billionaire from New York locked horns with Texas Senator Ted Cruz on Monday, attacking his campaign tactics and describing his rival as "sick". It comes after Mr Cruz fired his campaign spokesman over a doctored video that discredited Senator Rubio's views on the Bible.
Mr Cruz hit back on Tuesday, accusing Mr Trump of "vacillating" on his campaign issues and policies. Marco Rubio, meanwhile, has been urging registered Republicans to turn out in force for the caucuses.
Rivalry between Mr Cruz and Mr Rubio - both Latino senators - has also intensified in recent days, with the candidates attacking each other on the campaign trail.
Posted by Betty MacDonald Fan Club at 4:22 PM