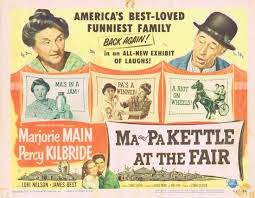 Ma and Pa Kettle were comic characters who first appeared in the novel The Egg and I by Betty MacDonald. She based them on farming neighbors in Washington state, U.S.A.

In 1996 Betty MacDonald's family had been interviewed by journalist Wolfgang Hampel who is the author of The Kettles' Million Dollar Egg.

The Kettles' Million Dollar Egg and the interview are as funny as a Ma and Pa Kettle Movie.

This interview has been published on CD/DVD by Betty MacDonald Fan Club in 2009.

Ma and Pa Kettle became the featured characters in a series of popular, light comedic movies in the 1940s and 1950s. The movies revolved around the absurd misadventures of the Kettle clan.

Pa (Franklin Kettle) (played by Percy Kilbride) is a gentle, slow-speaking, slow-thinking and lazy man. His only talents appear to be avoiding work and winning contests. Ma (Phoebe Kettle) (played by Marjorie Main) is larger, raucous, more ambitious and smarter than Pa, but not by much, and can easily be fooled. She is content with her role as mother to a small army of children on their ramshackle farm. At the end of the first film in the series, Pa Kettle wins a modern home that the family moves into. As the series continued, various reasons were devised to have the family relocate to the "old place", sometimes for extended periods of time.

Much of the humor comes from the preposterous situations the Kettles find themselves in, such as Pa being mistaken for a wealthy industrialist or being jailed after he accidentally causes race horses to eat feed laced with concrete. The Kettles first appeared in supporting roles in The Egg and I, starring Fred MacMurray and Claudette Colbert. After that they starred in a series of their own movies.

Main was nominated for the Academy Award for Best Supporting Actress in 1948 for her role in The Egg and I.

Main and Kilbride also appeared together in the 1948 Universal film Feudin', Fussin' And A-Fightin'. The movie also starred Donald O'Connor and Joe Besser. Many have mistaken this movie to be a Kettle film. Main played Maribel Matthews and Kilbride played Billy Caswell.

Kilbride retired after making Ma and Pa Kettle at Waikiki. The Pa Kettle character did not appear in The Kettles in the Ozarks. Arthur Hunnicutt played Pa's brother Sedgewick Kettle in that movie and in The Kettles on Old MacDonald's Farm, the last Kettle movie, Parker Fennelly played Pa Kettle.


Betty MacDonald fan club honor member Mr. Tigerli got so many fans from all over the World.


Mr. Tigerli is very busy around the World because of so many serious problems.

Thanks a million dearest Mary Holmes!

I'm one of Letizia's and Mary's many devoted fans.

Letizia Mancino sent this connecting piece to " The Second Paradise".

DEFIANT AS A COCK

That was how my friend Hilde Domin was, dear Betty! You would have liked her so much. She had also been in America. At that time you were a famous author but she was still unknown.

-Yes Betty, she sure did!! Otherwise how do you think she could have been a friend of mine?

-It’s all the same to me, Betty, whether a person is famous or not but that person must love animals

-Why was she as defiant as a cock?

-Well Betty, she was simply so!

-Like a pregnant woman in my “Egg and I”?

-No not so! Betty, Hilde was a whole farm!

- No Betty, Hilde was more! Almost a zoo! Even more. She was all the animals in the world!

-You loved her very much.

-As I love all animals.

You Betty, if I had known you, I would have loved you exactly so because you loved animals.

-But as defiant as a cock from my Bob-farm!

-Yes and no! (Hilde really loved this double form of answer). Listen Betty , I’ll tell you a story about how Hilde was. You would certainly have loved her.
I’ll call my story “The Second Paradise”.


The Lord God, one day, met Adam in Paradise and saw him lying under a palm.

And God spoke to him: Adam, my son, are you happy, are you content with Paradise ?

And God said: But I will create a second Paradise and give you a wife.

And God said: I will create the wife according to your wishes.

And Adam stood under the palm and thought hard.

And God said: Adam, are you ready?

And God said: So shall she be: Like a bird, a goldfish, a cat, an ant…

Adam answered: Oh Lord, that is wonderful, but she should be as faithful as a dog.

And God asked: Adam, have you finished?

Oh Lord, cried Adam. She should also be as delightful and gentle as a lamb and as defiant as a cock!

….She should be as curious as a monkey and as pampered as a lapdog.

And God said: So shall she be.

And Adam said: My wife should be as courageous as a lion and as headstrong as a goat…

And God said: So, like a bird, a goldfish, a cat, an ant, a dog, a lamb, a cock, a monkey, a lapdog, a lion, a goat… and slowly and surely he wished to begin creating…

But Adam stretched himself under the palm and called:

Lord, Lord, she should be as adaptable as a chameleon but not creep on four feet.

She should have sparkling eyes like, like… real diamonds. She should be as fiery as a volcano

But … she should have crystal-clear thoughts like a mountain spring.

God, the Almighty, was speechless…

And Adam spoke: Also she should be as quick as lightening…

And God said: Man, have you finished????

No, said Adam! She should be as strong as a horse, as long living as an elephant but as light as a butterfly!

God wished at last to begin creating her…

Lord, called Adam… she should be as stable as steel, but as sweet as three graceful women in one…

And God asked: Should she also be a poet?

Yes, called Adam from under the palm…

And God said: Adam have you finished?

Lord, I wish that, in the second Paradise I shall be one and doubled:

So God according to Adams last words created:


Letizia Mancino is an outstanding writer and artist.
I know you will enjoy this very charming and witty story the same way I did!

Thanks a Million, dear Letiza Mancino! You made my day!

As you know I'm very interested in pets and excellent literature.

Betty MacDonald Fan Club founder Wolfgang Hampel is working on an Eva Vargas biography. I'd love to know: Did Eva Vargas like pets and cats?

You can read my new story in Betty MacDonald Newsletter November.

I adore this great ESC entry very much.


Wishing you a great Sunday,

German votes could persuade Merkel to change course on refugees

Joerg Meuthen, co-chairman of the right-wing Alternative for Germany (AFD), answers questions for Reuters TV prior to an election campaign for the upcoming state elections in Baden-Wuerttemberg in Rastatt, southern Germany, February 22, 2016.


Reuters/Kai Pfaffenbach
Gerd Mueller has voted for Chancellor Angela Merkel's conservative Christian Democrats (CDU) for over 40 years. Now he's having second thoughts."I am very irritated," the 64-year-old said between business appointments in Rastatt, a well-off town of 50,000 near the border with France in Baden-Wuerttemberg, one of three German states holding elections on March 13.
"I don't feel Frau Merkel is bringing us along with her," he added, pointing to the German leader's welcoming stance towards refugees.
Mueller's frustration is shared by a rising number of voters. Elections next month in this prosperous southern state, its wine-producing neighbor Rhineland-Palatinate and Saxony Anhalt in the east will serve as a litmus test of Merkel's migrant policies ahead of the next federal vote in 2017.
Facing the biggest test of her decade in office, Merkel is scrambling to secure a Europe-wide plan to address the refugee crisis but the rank and file of her party are losing faith in her ability to make it work. Many want Germany to close its borders instead.
A poor showing by the CDU in the state elections would increase pressure on the chancellor to reverse course, 1-1/2 years before the federal election, when she is likely to seek a fourth term.
In campaign appearances in recent weeks she has warned about the consequences for Europe of border closures. But her conservatives are watching nervously as they lose ground to the anti-immigrant Alternative for Germany (AfD), whose hardline stance on refugees could bring it big gains in all three states.
"If the AfD does really well in all three elections, it will be blamed on Merkel and her refugee policies," said Frank Decker, political scientist at Bonn University.
"The stronger the AfD, the higher the pressure on the CDU."
In Baden-Wuerttemberg, a CDU stronghold for over 50 years before turning to a Green-led coalition in 2011 after Japan's Fukushima nuclear disaster, polls put the AfD on 10 percent or more.
"The political establishment in this country is in such a dire state that voters have to look for an alternative," Joerg Meuthen, 54, the AfD's leader in Baden-Wuerttemberg, told a party rally in Rastatt on Monday, to loud applause.
An economics professor, Meuthen has sold himself as a moderate but the party is viewed by many as having far-right leanings. At the rally, banners read "Courage for Germany".
At Meuthen's side stood Manuel Speck, 24, a local plumber, who said he used to lean towards the Greens but was now standing as the AfD's candidate in Rastatt as he believes Germany is on the wrong track.
"I don't want to be asked in 70 years, 'did you not know anything about this?' and then have to say, 'yes, we knew but we didn't do anything about it'," he said to loud applause from the 200 mostly older voters in attendance.
HIGH STAKES
The three states voting on March 13 have a combined population of some 17 million, a fifth of Germany's 81 million.
In wealthy Baden-Wuerttemberg, home to luxury carmakers Porsche and Daimler, AfD gains could prevent regional CDU leader Guido Wolf, 54, from winning back power from the Greens, who are led by state premier Winfried Kretschmann, 67, a former teacher.In Saxony-Anhalt, a poll published this week showed the AfD overtaking the Social Democrats (SPD), Merkel's coalition partner in Berlin, for the first time, a humiliation for a party that is girding for big losses on March 13.
To shore up his support in the eastern state, CDU premier Reiner Haseloff has publicly criticized Merkel's plans for a European solution to the migrant crisis.
In the third state, Rhineland-Palatinate, Julia Kloeckner, a charismatic 43-year-old former German "wine queen" who has positioned herself as a candidate to succeed Merkel one day, has seen her lead shrink in recent weeks.
Kloeckner and Wolf, fearing a loss of support because of the refugee issue, teamed up to issue a joint statement on Sunday which said: "Without grounds for asylum or protection status, no one else should be allowed to come into our country."
"There is only one winner for sure: that is the AfD party," said Josef Joffe, publisher-editor of German weekly Die Zeit. "And that will heighten the pressure on Merkel to stem the refugee flow she herself has invited into the country."
(Editing by Noah Barkin and Andrew Roche)