ISIS has claimed involvement in the train blast but has offered no evidence to support the claim.
Dover, about 80 miles southeast of London, is a port town with regular ferry services to France.
The suspect, who was arrested under the Terrorism Act, was being held in a local police station, the Met Police said. He will be transferred to a south London police station "in due course," the statement said.
"It's much too early to say" whether anyone behind the attack was previously known to authorities, UK Home Secretary Amber Rudd said Saturday after leading the second emergency meeting since Friday's attack of the country's COBRA committee of police and intelligence chiefs.
Authorities also will work to keep in check bomb ingredients like those used in this case, she said.
"There is no doubt that this was a serious IED (improvised explosive device) ... so we will have to make sure that we take all steps we can to ensure that the materials that this man was able to collect become more and more difficult to combine together," Rudd said. 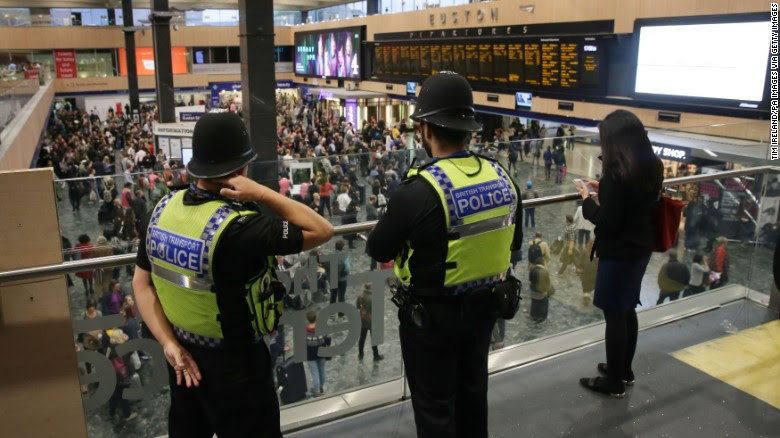 British Transport Police monitor activity Friday at Euston Station in London.
Police on Saturday afternoon also evacuated a residential address and surrounding buildings in Sunbury-on-Thames, Surrey, to the west of London, as they carried out a search in connection with Friday's attack.
The evacuation was a "precautionary measure" following the arrest in Dover, the Met Police said in a statement.
Searches continued later Saturday in Sunbury, with officers seen entering and departing Cavendish Road, which had been cordoned off.
Reporters at the scene attracted attention from residents, some of whom said they were surprised anyone in Sunbury could be connected with the incident.
The station in Parsons Green, southwest London, where an improvised device exploded as a train stopped during the Friday morning rush hour, reopened early Saturday -- with a visible police presence.
Meanwhile, hundreds of police officers scoured CCTV footage, questioned dozens of witnesses and studied the remnants of the device in search of clues to the identity of those responsible. 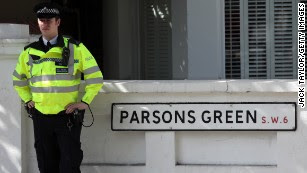 The unlikely suburban backdrop to London's latest terror attack
Prime Minister Theresa May announced late Friday that the UK terror threat level had been raised to its highest level.
"The public will see more armed police on the transport network and on our streets, providing extra protection. This is a proportionate and sensible step which will provide extra reassurance and protection while the investigation progresses," May said.
"The threat of terrorism that we face is severe but together, by working together, we will defeat them," she said.

Investigators were making "excellent progress" toward identifying, locating and arresting those behind what police have labeled a terrorist attack, Mark Rowley, assistant commissioner of the Met Police, said late Friday.
Asked about possible ISIS involvement, Rowley told reporters it is "routine" for the extremist group to take responsibility for attacks in "these sorts of circumstances," regardless of its actual involvement.
READ MORE: Britain's terror challenge will last a generation
London Mayor Sadiq Khan welcomed news of the arrest, saying "significant activity" could be expected Saturday and over the days ahead. He also urged anyone with information related to the investigation to contact police.
"It is important we all remain alert and vigilant," he said. "London will never be intimidated by terrorism. We will always defeat those who seek to harm us and destroy our way of life."
The British Transport Police tweeted: "Nationwide, extra officers from BTP are on duty today. If you see something suspicious, don't delay."

Scenes of panic broke out Friday at Parsons Green as the explosion went off in a busy train carriage.
"Suddenly, there was this boom," eyewitness Gustavo Vieira told CNN. "Everyone shouting and screaming. ... We were just leaving the carriage (when the blast happened) ... everyone starting running, ... and I didn't look back."
Most of those injured had flash burns, according to Rowley. None are thought to be in a serious or life-threatening condition, the London Ambulance Service said. 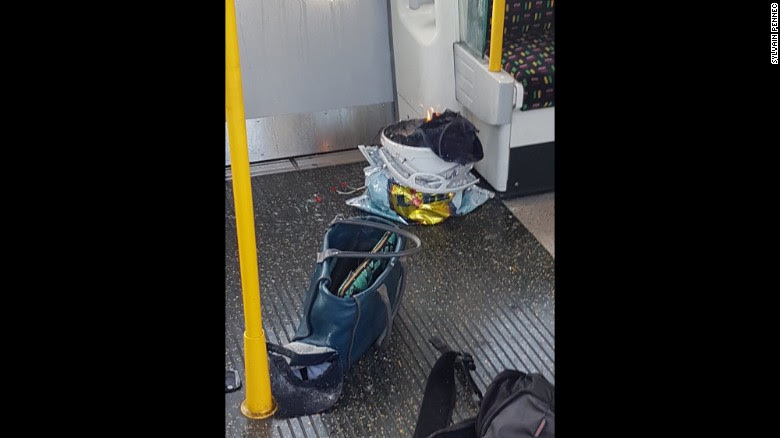 Eyewitness Sylvain Pennec took this photo; he described panic as commuters escaped the carriage.
A photograph taken by a witness showed what looked like a large plastic bucket in a supermarket carrier bag with wires trailing from it and flames licking the top.
A British security source who was briefed on the investigation told CNN that a timer was found on the device. It's clear the device was intended to cause much greater damage, the source said, but cautioned that the investigation is still in its preliminary stages. 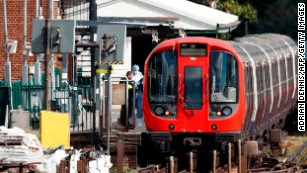 London train blast is the latest of 5 terror attacks in 2017 in the UK
Another source briefed by investigators told CNN that an initial assessment of the device indicates it is "highly likely" to have contained the explosive TATP but that this has not been confirmed. It also appeared to have been crude and poorly made, the source said.
"It was the type of explosive similar to that that was used in Manchester; (but) it didn't go off," UK Security Minister Ben Wallace told the BBC on Saturday, referring to the concert-venue attack in May that killed 22 people, including children.
Certain ingredients to make such an explosive could be bought in ordinary stores, he said.
But unlike the Manchester attack, there was "no obvious bomber attached to this," prompting the police manhunt, Wallace said. 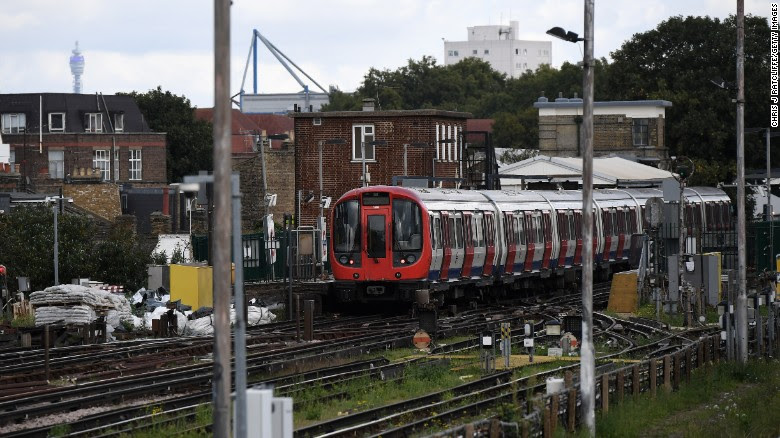 A Tube train is seen stopped at Parsons Green station on Friday.

Trump: 'We have to be tougher'

US President Donald Trump told reporters in the White House Rose Garden on Friday that "we have to be tougher, and we have to be smarter" in dealing with the terrorist threat. 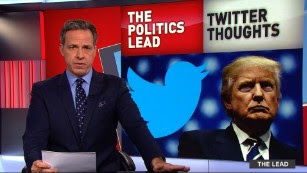 Jake Tapper: Trump concocts, shares 'untruths' 04:47
Later, speaking to members of the United States Air Force at Joint Base Andrews near Washington, Trump said "radical Islamic terrorism" would be eradicated.
His comments followed controversy over tweets he posted earlier in the day in which he railed against "loser terrorists" and suggested that the perpetrator was known to UK authorities and recruited on the Internet.
Those tweets prompted May and a London police spokesperson to publicly rebuke the President.
CNN's Carol Jordan, Simon Cullen, Laura Goehler, Hamdi Alkhshali and Paul Cruickshank contributed to this report.
Posted by Betty MacDonald Fan Club at 11:36 AM