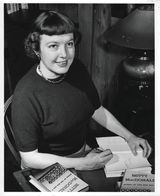 It's really very sad and tragic what happened in Mexico.


We are sending all our love and support to our Betty MacDonald fan club fans and people from Mexico.

Federal authorities in Mexico are reporting that the death toll has now increased to 230, with 100 confirmed dead in Mexico City.
Successful rescues, however, are ongoing. Reports suggest that one 77-year-old man, José Luis Ponce, was recently pulled from the rubble after spending more than 24 hours trapped in a partially collapsed apartment building.


Facebook Twitter Google plus
Advertisement
29m ago 23:57
Luis Carlos Herrera Tome, a 12-year-old who escaped the Enrique Rébsamen school alive, recounted the harrowing experience in an interview with the Associated Press:


“I saw that the ceiling started to break apart so I turned around,” he said.
“I grabbed my friends and we took off running,” he added, showing how they linked arms. They ran together for another staircase. The building continued shaking violently and one friend fell on the stairs.
“It moved a lot. I braced myself and cleared like five stairs in one jump,” he said.


“’Mom, I saw a girl go down because she was crushed,’” Tome recalled her younger son telling her after he escaped the building. “He cried a lot for that and said, ‘I couldn’t save her.’”
When Jose Raul made it to the street he looked back at the school and said, “My brother, my brother,” Tome said.
The brothers hugged when they found each other across the street.
“We cried. He was my biggest worry,” Luis Carlos said.

Read the full account here. Here are some recent images from the ongoing rescue efforts at the school:


Facebook Twitter Google plus
29m ago 23:57
Since you’re here … we have a small favour to ask. More people are reading the Guardian than ever but advertising revenues across the media are falling fast. And unlike many news organisations, we haven’t put up a paywall – we want to keep our journalism as open as we can. So you can see why we need to ask for your help. The Guardian’s independent, investigative journalism takes a lot of time, money and hard work to produce. But we do it because we believe our perspective matters – because it might well be your perspective, too.
If everyone who reads our reporting, who likes it, helps to support it, our future would be much more secure. You can give to the Guardian by becoming a monthly supporter or by making a one-off contribution. - Guardian HQ
45m ago 23:41

Facebook Twitter Google plus
1h ago 23:27
More details from Guardian reporter David Agren on the rescue effort at the collapsed Rébsamen school:

The White House has released a bit more detail about Donald Trump’s call with president Enrique Peña Nieto, but not much. Officials said Trump offered “condolences for the lives lost and damage caused” and further “offered assistance and search-and-rescue teams, which are being deployed now”.
Trump “pledged to continue close coordination with Mexico as the two countries respond to the recent earthquakes and hurricanes”, the statement added.


And more details from the US Agency for International Development, which says it will conduct “damage assessments” and coordinate with “local authorities and aid groups to bring critical assistance to local people”:


The US Disaster Assistance Response Team (Dart) includes an urban search-and-rescue team from the Los Angeles county fire department as well as federal experts with the office of US foreign disaster assistance.
Facebook Twitter Google plus
Advertisement
2h ago 22:44

There appears to be some good news at the collapsed Enrique Rebsámen school. Reporter David Agren, who is on the scene, says applause has just broken out and that officials are reporting that there has been a successful rescue.


There is lots of fist pumping, including from a worker on top of the rubble being piled into a dump truck, and an ambulance has just arrived, according to Agren. Some are reporting that it appears two have been rescued:


Facebook Twitter Google plus
2h ago 22:30
Rescue teams continue to dig people out from under the rubble, in some cases recovering survivors who have stayed alive for nearly a day since the earthquake hit.


Reuters has more on the rescue tactics:


Emergency crews, volunteers and bystanders toiled on Wednesday using dogs, cameras, motion detectors and heat-seeking equipment to detect victims who may still be alive more than 24-hours after the quake...
Hundreds of neighbors and emergency workers pulled rubble from the ruins of the school with their bare hands under the glare of floodlights a full day after the shock. Three survivors were found at around midnight as volunteer rescue teams known as “moles” crawled deep under the rubble.”

And more on the efforts to save a young girl from the rubble at the Enrique Rebsámen school in Mexico City:


Television stations broadcast the nailbiting, hours-long rescue attempt live after crews at the school in the south of the city reported seeing the girl move her hand. They threaded a hose through debris to get her water.
The girl’s name was not made public, but her family waited in anguish nearby.
Rescuers moved slowly, erecting makeshift wooden scaffolding to prevent rubble from crumbling further and seeking a path to the child through the unstable ruins. They implored bystanders to be quiet to better hear calls for help.

Reporter David Agren has an update from the site of the collapsed Enrique Rebsámen school in Mexico City where some parents are still clinging to rumors that there may be more survivors:


When Silverio Pérez reached the ruined school, he could still hear the screams coming from the children trapped beneath the shattered concrete.
Dozens of people – students and teachers – were still inside the Enrique Rebsámen school when Tuesday’s magnitude-7.1 earthquake rocked Mexico City, reducing the three-storey building to mound of rubble and twisted metal.
Like many other neighbours, Pérez, a lawyer, rushed to the scene and started digging at the wreckage with his bare hands. “I heard kids crying when I got there and saw them hurt. Badly,” said Pérez, bleary-eyed and disheveled after working through the night. 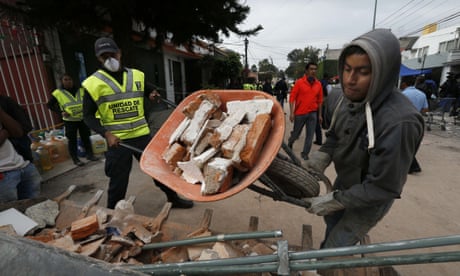 'They were buried': hope for children dims amid rubble of Mexico City school

Officials have revised the total death count from 225 to 223 confirmed fatalities. Luis Felipe Puente, the national civil defense coordinator who has been providing official updates, tweeted the new figure at 3.15pm local time:


That’s 93 in Mexico City, 69 in Morelos state, 43 in Puebla, 13 in the State of Mexico, four in Guerrero and one in Oaxaca.
More official information from the civil defense coordinator:

Nina Lakhani
President Enrique Peña Nieto has arrived in Jojutla, a small town in the state of Morelos, where he is visiting the worst affected areas and will coordinate relief and rescue efforts with the state government and armed forces.


The municipality of Jojutla, which is situated 90km south of the capital, has around 55,000 inhabitants across several small towns. It was close to the epicentre of the 7.1 tremor and is one of the hardest hit areas outside of Mexico City.
At least 14 people are confirmed dead, 300 homes and businesses destroyed and around 1,500 more damaged by the earthquake, the mayor said. No building in the town centre escaped damage, according to the national newspaper Universal. Many buildings are unstable and at risk of collapse.


Pleas for urgent help for rescue teams, volunteers, blankets, medical and food supplies, were made by Morelos residents on social media last night.


Facebook Twitter Google plus
Advertisement
3h ago 20:58
Mexico is using soccer stadiums as relief centers following the earthquake, including Mexico City’s Estadio Azteca, according to the AP. The Estadio Azteca was scheduled to host a match between Chivas and America on Saturday and a November National Football League game between the New England Patriots and the Oakland Raiders.
Mexican league president Enrique Bonilla told Fox Sports that “it is a complex decision and all the facts are needed” before a decision is made about scheduling.
Officials have said there was no major damage to the stadium.
Facebook Twitter Google plus
4h ago 20:21

Calls for help in Xochimilco

Nina Lakhani
This morning, calls for urgent help were made on social media for Xochimilco, one of Mexico City’s poorest areas, where some reports suggested that numerous people are trapped under collapsed buildings in the San Marcos, San Gregorio and Santa Cruz Acalpixca communities.


Sergio Aguyo, a political analyst, wrote on Twitter: “Xochimilco needs help, provisions and volunteers. There are important damages and no support has arrived.”


Within hours, people from all walks of life had mobilized and started arriving with much-needed medical supplies and food:


Facebook Twitter Google plus
4h ago 20:05
Here are some more details on the ongoing rescue efforts at the at the Enrique Rebsamen school in southern Mexico City, where one child was found alive. The AP spoke to volunteer rescue worker Pedro Serrano, who managed to crawl into crevices of the pile of rubble at the school. He made it into a classroom, but found everyone inside dead:


We saw some chairs and wooden tables. The next thing we saw was a leg, and then we started to move rubble and we found a girl and two adults — a woman and a man...
We can hear small noises, but we don’t know if they’re coming from ... the walls above, or someone below calling for help.”

Some workers said Wednesday morning that a teacher and two students had sent text messages from within the rubble, according to Reuters. Adriana D‘Fargo, 32, had been waiting hours for news of her seven-year-old, telling a reporter: “They keep pulling kids out, but we know nothing of my daughter.”