Residents recourse to shelters amid power cuts and waves of rain, as hurricane strengthens to Category 4. 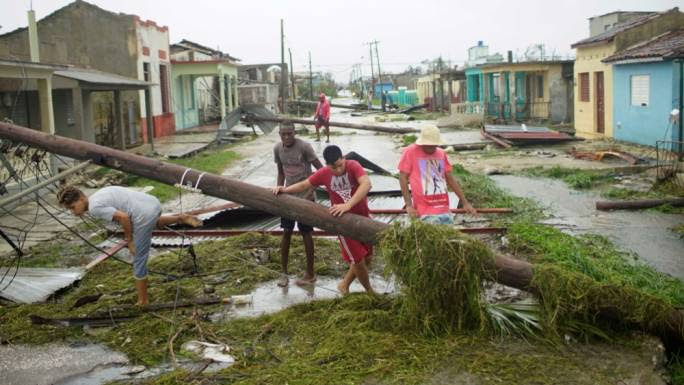 People walk on a damaged street after the passage of Hurricane Irma in Caibarien, Cuba (Alexandre Meneghini: Reuters)

Hurricane Irma began pummelling Florida late on Saturday, threatening almost the entire southeastern US state after making its way through the Caribbean.

Tens of thousands of Floridians hunkered down in shelters prior to a direct hit from the monster storm, after more than 6.3 million - nearly a third of the Florida’s population - were asked to evacuate.

For those still at home, it was already too late to escape the wrath of what could be the worst hurricane to face Florida.

More than 170,000 homes and businesses in Florida have lost power.

Florida Power and Light said on its website that more than half of those outages were in the Miami area, where over half a million people have been ordered to evacuate.

"If you have been ordered to evacuate anywhere in the state, you need to leave right now. Not tonight. Not in an hour. Now. You are running out of time to make a decision," Governor Rick Scott said hours before wind gusts began to lash the island chain known as the Florida Keys.

At North Collier Regional Park, a designated shelter just outside the city of Naples, anxious evacuees prayed they and their loved ones would remain safe.

MacDill Air Force Base, the military installation home to US Central Command, issued mandatory evacuation orders with the eye of the storm expected to pass over its home city of Tampa early Monday.

The White House said President Donald Trump, Vice President Mike Pence and their cabinet were briefed on Hurricanes Irma and Jose, with Trump warning on Twitter that "this is a storm of enormous destructive power".

Posted by Betty MacDonald Fan Club at 6:01 AM