Merkel’s challenge: herding a coalition of enemies to govern


Germany faces months of instability as Angela Merkel seeks to form a government with two parties that are bitter enemies.
In what could be her biggest challenge in 12 years in office, the Chancellor will also face a hostile Bundestag with the anti-Islam, anti-EU policies of the far-right Alternative for Germany (AfD) setting much of the agenda.
Thousands of people protested in western Germany after the AfD won more than 90 seats in the Bundestag, with 12.6 per cent of the vote, boosted by the support of up to 45 per cent of voters in the former East Germany.
AfD spokesman Joerg Meuthen said the party had offered constructive co-operation. “Riots is not the way to go,” he said.
“We plan to be strong opposition, the country needs it. We want to bring attention to infringements around migration and European policy and we are not going to sit back.”
Mrs Merkel appealed to Social Democrat leader Martin Schulz to rethink his refusal to form a coalition, saying “things might look different in the morning’’. 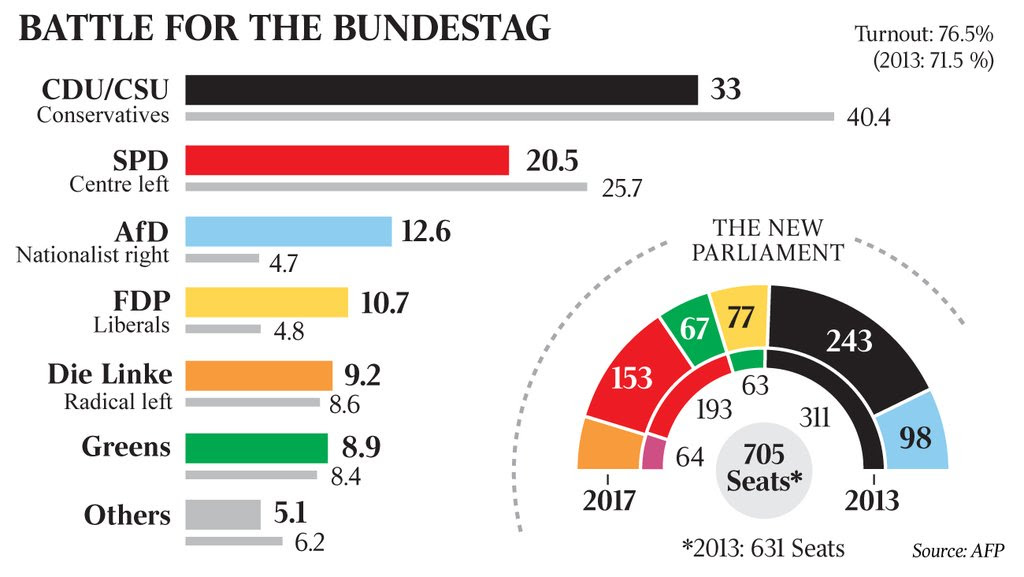 Her Christian Democrat party scored its lowest result since 1949, with 32 per cent of the vote. The Social Democrats, crushed by their worst election result, at 20 per cent, want to form a strong opposition to ­suppress the AfD voice.
Mrs Merkel will be left with two unappetising choices, to form a minority government with the Christian Socialists or to offer concessions to the left-wing Greens and the pro-business Free Democrats (FDP). The FDP and the Greens have many clashing policies and a history of open hostility towards each other.
“I am a practical person and Germany needs a government and there are at least two options,’’ Mrs Merkel said. “I don’t think we will instantly have a new government. These are turbulent times.’’
She said she hoped a working government could be in place by Christmas. She accepted responsibility for the refugee crisis that has split the country, but insisted she made the right decision.
“I am not trying to escape this,” she said. “We have recapitulated what happened in the autumn of 2015. All other discussions discussed were not an option and I believe the decision I made was right.
“We haven’t fully managed to get rid of concerns; issues about integration, migration, and external border protection isn’t where it needs to be. There is still much that needs to be done.’’
The AfD has threatened to start an inquiry into the legality of Mrs Merkel’s decision to open borders to about 1.5 million immigrants, many of them North African economic migrants, in addition to Syrian and Iraqi asylum-seekers.
Mr Meuthen said the AfD had been strongly supported by the German people.
Mr Schulz blamed the shift to the right on the Chancellor’s policy vacuum and foreshadowed paralysis in the Bundestag. “Mrs Merkel will rubberstamp everything and she will pay concessions to stay in power. She is a hoover of ideas, she sucks up everyone’s ideas. There will be a contradiction coalition between the Greens and Christian Socialists; that will paralyse the government.’’
Mrs Merkel will have to harden her migrant policies, particularly strengthening borders and removing unsuccessful asylum-seekers, to help the Christian Socialists in Bavarian state elections next year.
If she partners with the FDP, it wants a Canadian or Australian-style immigration model allowing for much more control and focusing on skilled workers. Domestically, Ms Merkel faces pressure to raise pensions for an ageing population and to stimulate the steel and carmaking industries while satisfying the Greens’ calls for renewable energy targets.
Mrs Merkel will also battle to gain any Bundestag support for an expanded EU, European army or German involvement in euro bonds. That will impact on the expansionist aims of European Commission President Jean Claude Juncker and the pro-European alliance proposed by French President Emmanuel Macron.