David Cassidy died a year ago

Singer's family confirmed David had passed away after he was admitted to hospital following multiple organ failure
By Ellie Henman, Showbiz Reporter 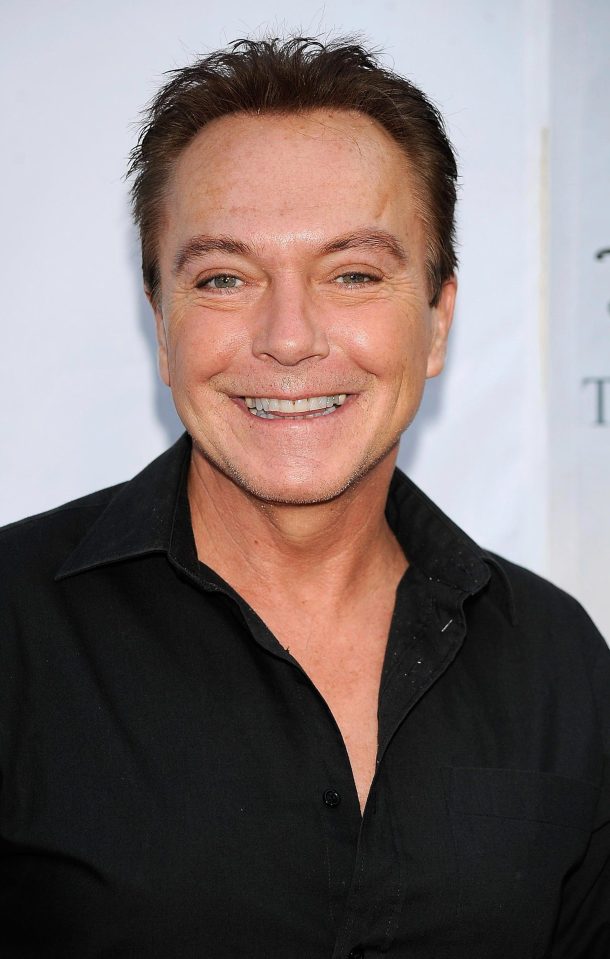 DAVID Cassidy has died at the age of 67, his family confirmed this morning.
The actor and musician, who shot to fame as Keith in 1970s TV sitcom The Partridge Family, was admitted to a hospital in Florida last week after he suffered multiple organ failure.

But David, who went on to have a successful music career with multiple Grammy nominations and 30million record sales worldwide, sadly lost his battle.

In a statement a representative said: “On behalf of the entire Cassidy family, it is with great sadness that we announce the passing of our father, our uncle, and our dear brother, David Cassidy.
“David died surrounded by those he loved, with joy in his heart and free from the pain that had gripped him for so long.
“Thank you for the abundance and support you have shown him these many years.”

His nephew Jack told his Twitter followers: “My uncle David Cassidy has sadly passed away tonight... & in the process of mourning I can't help but thank God for the joy that he brought to countless millions of people!“I don't think I'm alone in saying that we will all miss him. God Speed!”
Earlier this year, David revealed he was battling dementia and planned to stop touring to concentrate on his health.
He confirmed he was fighting the disease after he was filmed slurring and falling off stage during a gig.

The veteran star told People magazine: “I was in denial, but a part of me always knew it was coming.“I want to focus on what I am, who I am and how I’ve been without any distractions. I want to love. I want to enjoy life.”
David, who had suffered from alcohol problems in the past, also said he had decided to step out of the limelight after struggling to remember lyrics to his classic songs.
Following the news of his death, tributes from those who worked with David poured in.
Beach Boys co-founder Brian Wilson tweeted: “There were times in the mid-1970s when he would come over to my house and we even started writing a song together.
“He was a very talented and nice person. Love & Mercy to David and his family.”

Harry Connick Jr. told his fans: “So sad to hear of the passing of David Cassidy...He was always so kind to me - such a pleasure to have had him on my show... Sending love and prayers to his family... R.I.P. friend.”Singer Gloria Gaynor also paid tribute to the star, writing online: “My thoughts and prayers are with the family and loved ones of David Cassidy ... part of a musical legacy via his role as Keith Partridge that brought music and laughter into the homes of millions.”

David Cassidy performs I Think I Love You with The Partridge Family
Musician Marie Osmond, member of showbiz family The Osmonds, shared a photo of old magazines featuring the teen idol.
She added: "Heartbroken over the passing of #DavidCassidy. He graced the covers of teen magazines w/ my Brothers in the '70s. My condolences to his Family."
Director Kevin Smith posted a video of Cassidy presenting an MTV award in 1990, and spoke of how the star had been a regular feature on his TV screen during his childhood.
He said: "I grew up in an era before even cable TV, when The Partridge Family was already in reruns.
"David Cassidy's Keith was one of my favorite TV characters. He was legit funny AND he could sing. The man entertained me during my childhood and even years later."
Singer Rick Springfield said: "So sorry to hear about David Cassidy's passing. Godspeed."

As well his battle with dementia, David also suffered a string of legal problems in recent years, including several arrests on suspicion of drink-driving, and a court-ordered rehab stint in 2014. David was born into showbiz as the son of singer and stage star Jack Cassidy and actress Evelyn Ward.
He made his stage debut in 1969 while still a teenager, before signing with Universal Studios and moving to Los Angeles.
David was cast as Keith Partridge in the musical TV show The Partridge Family in 1970.


David Cassidy wipes away tears as he talks to Dr Phil about his dementia
It  spawned the release of 12 studio albums, six compilations and 24 singles, with his biggest selling track I Think I Love You remaining as his best known hit.
His success continued into the 1980s, when he performed The Last Kiss alongside George Michael, who cited him as one of his major influences.
Cassidy has been married three times – to Kay Lenz from 1977 to 1983, Meyl Tanz from 1984 to 1985 and Sue Shifrin, who he married in 1991 and divorced from last year.
He has one son, Beau, born in 1991, and a daughter, Katie, who is an acclaimed actress who has starred in Arrow and Gossip Girl.

After his father fell ill, Beau thanked his fans for their kind messages.He said: “Unfortunately David is very sick. However he is getting the support he needs, surrounded by the people he loves most.
“Thank you very much for your love and concern that you have expressed in your messages to him.”
David, who received an Emmy nomination for his appearance on Police Story in 1978, was most recently seen on TV in a 2013 episode of CSI: Crime Scene Investigation.