do you like ' The Egg and I ' movie with Claudette Colbert as Betty and Fred McMurray as Bob?
What about Ma and Pa Kettle series with Marjorie Main and Percy Kilbride as Ma and Pa Kettle?
Did Betty MacDonald enjoy them?
If you know the answer, send us a mail, please and you might be our Betty MacDonald fan club contest winner November.


The Domestic Arts as Practiced in The Egg and I 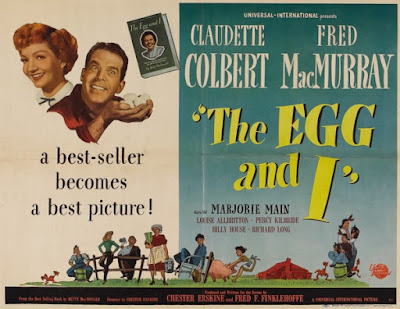 Author Betty MacDonald's (Mrs. Piggle-Wiggle series) first and greatest success was the humorous semi-autobiographical novel The Egg and I published in 1945.  In 1947 Universal brought the book to the screen starring Claudette Colbert and Fred MacMurray as a couple transported from city life to a chicken farm in the mountains of Washington state.

Apparently, time spent in a foxhole in Okinawa gets a guy to thinking about the real things in life. For Bob (Fred MacMurray) these real things include his own little chicken ranch.  Presumably, one of the other real things he thought about were love and marriage.  Probably expecting his intended, Betty (Claudette Colbert) to understand him through telepathy, he waits until after they are married to announce that he has purchased the chicken ranch of his dreams and she's going to love it. 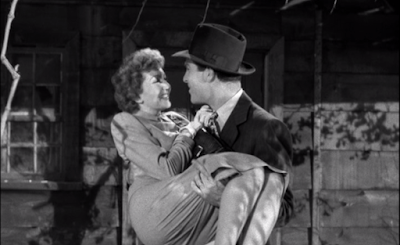 
Betty, whose hands are used to twice weekly manicures and have never done anything rougher than play the piano, is a good sport and truly supportive of Bob, so off they go to live in the country.  The ranch is nothing more than a ramshackle group of buildings in desperate need of repair.  Bob views the whole thing through possibilities and rose-colored glasses.  Betty is not so optimistic, especially when she first meets the resident stove. 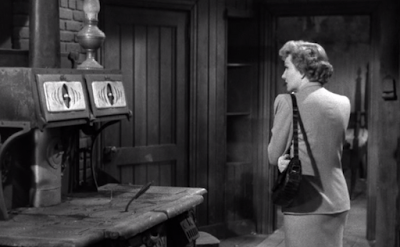 BETTY MEETS STOVE
"I don't think it likes me." 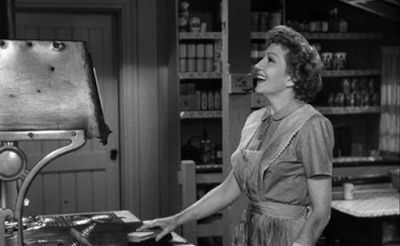 BETTY BEFRIENDS STOVE
"There!  I bet you never looked better in your life." 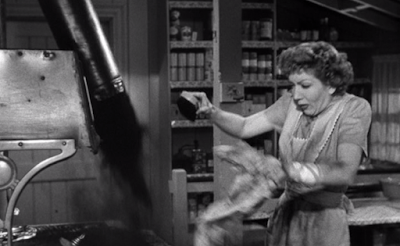 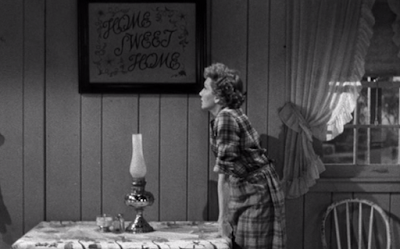 BETTY'S WEARY TRIUMPH!
The victory of a well scrubbed floor. 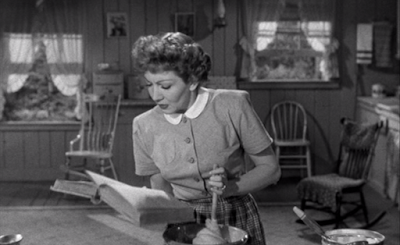 BETTY'S FAILURE
You follow the instructions, it should work. 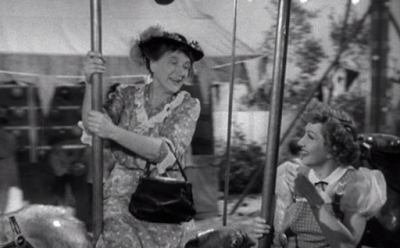 Maybe Betty should talk to her friend Ma Kettle.  Ma, Pa and their census taker's delight of a brood live down the road in a place no one would mistake for a photo spread in House Beautiful.

"When I was first married, Dearie, I was as neat as the next one.  I tried to keep my house and kids clean.  But Pa was an awful lazy so-and-so and it was fight, fight, fight all the time.  So I finally give it up.  I says I can't make Pa change and be neat so I'll have to change and be dirty.  Been peace in this house ever since." 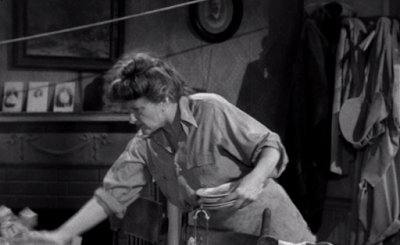 ...GETS NO COMPLAINTS FROM THE FAMILY. 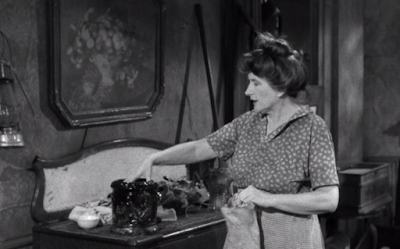 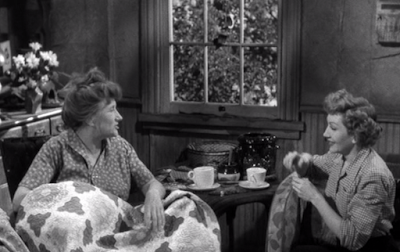 MA HAS AN ARTISTIC SOUL
"I made one of these here quilts every year since we was married.  Got 'em in the closet in the spare room.  I figure it will be somethin' real nice to leave the kids when I die." 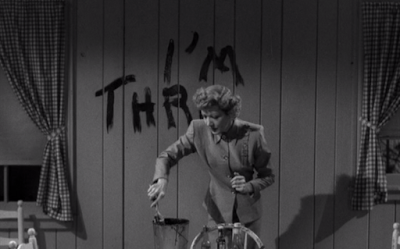 
Don't worry, folks.  Claudette Colbert and Fred MacMurray co-starred in seven films.  They have the happy ending bit down pat.
Marjorie Main and Percy Kilbride would play Ma and Pa Kettle in seven welcome sequels.  Marjorie would star as Ma in two more Kettle pictures after Kilbride's retirement.  Breakout stars!
What did I learn from the examples of housewifery set before me in this movie?  Well ... let's just say that I'm not as neat as Betty nor as messy as Ma, but I tend toward the casual line when it comes to tending to the old homestead and its occupants.  Yes indeed, very casual.

Do you have any caricatures of Betty MacDonald?

We are working on this subject ' Betty MacDonald in caricatures ' and are very grateful for your support.

Wolfgang Hampel, Monica Sone's very good friend and author of Betty MacDonald and Ma and Pa Kettle biography told us that Monica Sone was always delighted to hear from her fans.

It's the same with our other Betty MacDonald Fan Club Honour members.


If you have any questions or greetings don't hesitate to send them, please.


The Betty MacDonald fan club honor members are very happy to hear from you.

I admire Monica Sone's book Nisei Daughter.
Betty MacDonald was right when she described Monica as Kimi the way she did in her book The Plague and I.


Monica was very witty and intelligent although the subject of Nisei Daughter isn't a funny one. Just the opposite!

The updated versions with many new info, documents and photos are really fascinating.

The Egg and Betty

This is the study of the bestseller, The Egg and I, by Betty MacDonald, first printed in 1945. You can read many fascinating thoughts from readers of The Egg and I and the long and careful investigation undertaken by the founder of Betty MacDonald fan club.

Wolfgang Hampel has made funny and enigmatic titles like Betty MacDonald did.

This first chapter is an informal discussion about two families, the Kettles and the Hicks, who where the closest neighbors of Betty.

A  "Betty Expert" ventured the hypothesis that the name Hicks derives from the adjective "hick" meaning rural and uncouth.
Wolfgang Hampel unveils the truth which was not easy to guess and to find, and which is completely different.

The second chapter starts with a few words about the Kettles. The rest of the chapter is about the representation of the Indians in MacDonald's book.

Wolfgang Hampel has asked the opinion of readers, and publishes their very interesting reactions

The next chapter is about Betty's first husband, Robert Eugene Heskett

Wolfgang Hampel  reveals a very interesting lie of Betty, which is that before marrying Bob, she already lived in the country, not in town.

Knowing the real life of Bob makes you feel more pity for  poor Betty. One might also wonder why she has been so eager to quit her home at an early age, accepting to fly away with an old alcoholic as a result.

In the next chapter the truth is told about the fate of the farm after Betty and Bob left it.

In the rest of the book, you'll discover many other interesting things.

I won't go into details here (although I have carefully read every line till the end), because the purpose of a review is only to give an idea of the content of a book.

Wolfgang Hampel has done a wonderful work of research.

Now, every reader of Betty MacDonald's The Egg and I has the possibilty of learning the true story, which, personally, I find more interesting than the semi-fiction it inspired.

Rating: ****
The Kettle's Million Dollar Egg is an historical account of a trial.

Betty MacDonald is the author of The Egg and I, which turned out to be a best-seller. It was adapted to the screen. A movie was made, and proved to be very successful too. Afterwards " Ma and Pa Kettle"  appeared in a very successful series after the name of a couple of farmers who are not very flatteringly described by Betty MacDonald. Undoubtedly it is their dirtyness and dumbness that make the spectators laugh. The series was a big success. The problem is that a family sues Betty MacDonald for having been exposed to ridicule in her book. The Bishop family believes she had been depicted by Betty MacDonald as the Kettle family.
The plaintiffs are the first to talk. On some issues, witnesses are asked to confirm or infirm what has been said.
A few days later, Betty MacDonald can talk. She is asked to tell in what circunstances she wrote the book.

Comments Being the defendant is not pleasant. Being in the witness stand is not always very easy:

She said a finer man never lived than Al Bishop and described his wife as a wonderful woman.
Cautioned by Judge Wilkins just to answer questions and not to volunteer information, Mrs. Madeline Bishop, a sprightly and alert woman, turned to the judge with a broad smile: "Am I talking too much, judge?" she asked.
"We all do that sometime," the judge remarked smiling.
"But I can't tell you unless I explain," she answered pertly.
According to her Albert Bishop had tremendous working habits, not at all like Paw Kettle in the book.
He had red hair "like that juror's", pointing to a young juror with red hair. Albert Bishop worked "like a dog, night and day." Her sister wasn' t profane as was Maw Kettle. "It was not a habit of hers. She was not a profane woman. She might say 'Doggone you' to a kid or something like that."
Several pictures of the Albert Bishop family which defense attorney Crandell sought to have introduced through Mrs. Bishops identification were ruled out of evidence as having no bearing on the case since they were taken a number of years before the time allegedly covered in THE EGG AND I.
As the last of the pictures was ruled out, Mrs. Bishop drew a photograph in a small round frame from her purse. "Here's one of my sister when she was a young woman," she remarked , " but I suppose that one has no bearing either." Then she put the picture before Judge Wilkins, commenting as she did so: "She's sweet, isn't she?"

The situation is absurd. When people are attacking others or defending themselves, they feel the need to say and do stupid things, as if it were the most stupid person who would be the winner in the end. The judge knows that natural inclination, he encourages the others to talk nonsense, and then, he rules out whatever he likes. Even if the Bishops are mostly interested in getting financial subsidies rather than in restoring their dignity and honour, they are nevertheless victims in some ways, because Betty's book changed their life. They had to deal with tourists, who wished to see the ranch where Betty lived. They had to recreate it, to reinvent a myth, to charge one dollar per visit, to declare they were the Kettles or to deny that according to circunstances.
The story is about a rebellion against mighty forces which are thwarting long-established plans and desires. The Olympian Gods want to make surprises, but the poor mortals don't like them.
Work and life of Betty MacDonald will be and had been honored by Wolfgang Hampel in Vita Magica.

There is also an article about Betty MacDonald fan club letter collection.

We got very important info regarding the original 'The Egg and I' and the way Betty MacDonald described her first husband Robert Eugene Heskett and their neighbours.


Do you want to see photos of Betty MacDonald's beloved grandmother Gammy?

You can see several ones in Betty MacDonald fan club newsletter November.

By the way I totally agree. The author of an oustanding Betty MacDonald biography needs a very good sense of humor.

It' s such a pleasure to read them.