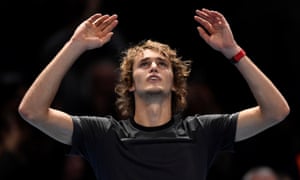 Kevin Mitchell at the O2 Arena
Just 24 hours after being booed off court for having the temerity to beat Roger Federer, Alexander Zverev not only overpowered the world No 1 Novak Djokovic in straight sets to win the biggest title of his career but won the crowd over, too, in what was an emotional conclusion to the season.
Zverev served Djokovic out of the ATP Finals 6-4, 6-3, and the bewildered Serb, who was a firm favourite after beating him handily in their round-robin match four days earlier, was powerless, for the most part, to change the course of the match.
Zverev hit a pitch of serving excellence in the first set, at 88%, that inevitably dipped in the second but his hammer blows had already done the damage, and the German’s all-round game, court awareness and character were strong enough to get him through an edgy finish.

Djokovic, who is top of the rankings after coming from 22 in the world when returning from injury at the start of the year, told Zverev courtside: “You are still quite young and have already had an amazing career but there’s no doubt you will be one of the favourites in every slam.” It was more than a platitude and it had context.
Zverev smiled like a child on the same spot where he looked so hurt the previous day when fans booed him for stopping during a point in the tie-break against Federer after a ballboy in his eyeline let a ball dribble towards the court.
“It was tough for me yesterday, because I didn’t think I had done anything wrong,” he said. “Today, I had to be aggressive but patient too. Right now I can’t describe it. It is the biggest trophy I’ve ever won.”
Zverev is the first German to win the ATP Finals since Boris Becker beat Michael Chang in Frankfurt 23 years ago, and, at 21, the youngest champion since Djokovic beat Nikolay Davydenko in Shanghai in 2008. He has already won three Masters 1000 titles and reached the quarter-finals of a grand slam.
However, all the numbers in the world could not convey the significance of a win that catapults him alongside Djokovic and Federer, as well as Rafael Nadal, who was absent injured. Only three other players – Nadal, David Nalbandian and Andy Murray – have beaten the Serb and the Swiss in the semi-final and final of the same tournament.
It was all the greater an accomplishment for the opponent he beat. The only players Djokovic had lost to in 36 matches since the start of Wimbledon were the other two aspiring contenders to overthrow the ruling elite, Karen Kachanov and Stefanos Tsitsipas. These musketeers have their swords drawn. As Zverev observed: “Obviously the older guys, the Golden Generation as you call them, are still winning most of the titles. I’ve been in that mix for a little time now but I hope we younger players, the Next Generation, can get in there and win the bigger titles next season.”
Djokovic, who had not dropped a set all week, had no answer to the 10 aces that flew past his flailing racket, nor to the haymaker ground strokes that pinned him to the baseline. He looked for early openings with deep, angled ground strokes, but four Zverev aces kept him off balance. Zverev held to love in the eighth game. He hugged the net, too, showing rare deftness and acumen, which maybe took the five-times champion by surprise.
In their first encounter Djokovic’s defence was rock solid, as he saved the only two break points against him in the early rounds; here, he cracked at the third time of asking, dumping a forehand. Serving for the set, Zverev aced wide at 130mph wide, made his second unreturnable, down the middle, aced again on the ad side and, after Djokovic grabbed a point, forced a backhand error to clinch it.
An exchange of breaks at the start of the second betrayed nerves on both rackets. Back-to-back double faults and a sloppy backhand halted Zverev’s charge but he regrouped to break again. Djokovic, a set and 1-3 down, looked drained of ideas and energy against his tormentor, but held to love. He needed to draw on all the campaigns and dark corners of his past to get out of his predicament; it was beyond him.
Zverev held nervously for 4-2. He knew Djokovic would be dangerous to the end, just as Federer had been, and he has not always shown composure in his young career. He found it now.
Even as some of his forehands began to stray and the serve slipped a notch, with the adrenaline pumping through his long arms and legs, he held his nerve. He knew the story could change in a twinkling. His final ace clipped the deuce line as he eased to within a game of the title with a withering forehand winner, and Djokovic stepped up to the service line, with one last chance to extend the argument.
Zverev would not be denied. A double fault, Djokovic’s first, revealed his anxiety, as did an overcooked backhand to hand Zverev two championship points. He saved one with a heavy, wide serve, but he was stranded as Zverev’s forehand drifted past him after an hour and 20 minutes of enthralling tennis.
A star who was already born now shone brighter. They stood to acclaim him as he went into the crowd to embrace his coach, Alexander, a decent player himself – but an even prouder father now.