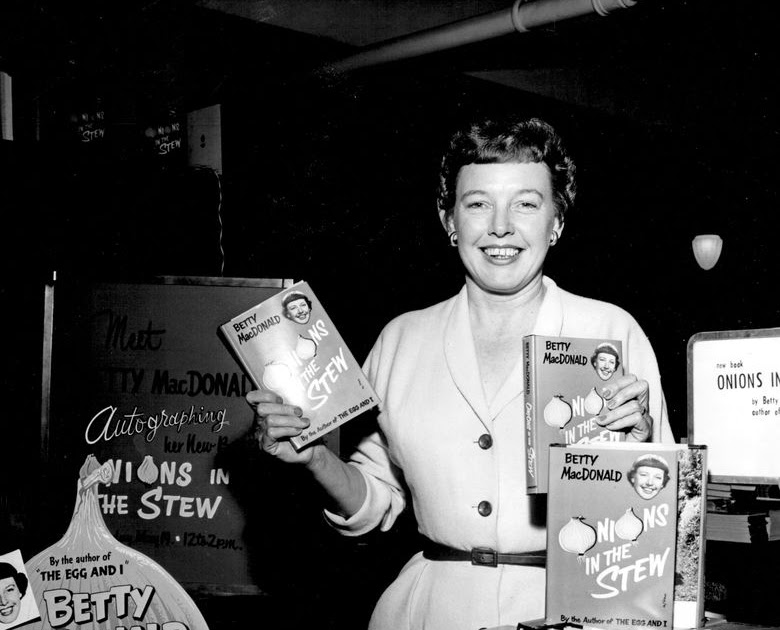 
The history of Betty MacDonald Fan Club and Betty MacDonald Society began in 1983. You can read this in many national and international newspapers and magazines.
Betty MacDonald loved in Germany Axel Schappei The Vashon-Maury Island Beachcomber June 16, 1983
Go into any ordinary German bookstore and ask for former Islander, Betty MacDonald's paperbacks and you'll be handed - at least - three books: Die Insel und ich ( Onions in the Stew ), Das Ei und ich ( The egg and I ) Betty kann alles (Anybody can do anything). Scholars in the Pegasus German courses on the Island may notice that the German titles of Betty MacDonald's famous autobiographical novels have been translated appropriatley.Betty would like them. Betty MacDonald, who lived on Vashon Island, is tremendously popular in Germany. She once was one of the most well known and widely read novelists in the United States. But would you guess that more than two million paperbacks and hard-cover books of Betty MacDonald have been published and sold in Germany during the last 30 years? Her bestseller The Egg and I reached about half a million in July 1981. From March 1964 until October 1980, 107000 copies of Anybody can do anything were sold in 12 editions. Onions in the Stew - her novel about living on the Rock - sold 103000 copies from May 1964 until September 1980, also in 12 editions. "She is incredibly successful, really, not only her novels. Her books for children like Nancy and Plum or the Mrs. Piggle-Wiggle-Stories still belong to the most successful childrens' books after all those years," says Wolfgang Hampel, who is so convinced about Betty MacDonald. He simply loves Betty MacDonald and her books: "She's so homorous, her stories about everyday-life's and awkward situations are just incomparable. It's like a good friend taking you by the hand and leading through her life." That's why Wolfgang Hampel and four other German Betty Fans plan to launch an extensive exhibition about Betty MacDonald, her life and her work.Originally they wanted to open the exhibit on February 7, 1983, 25th anniversary of Betty MacDonald's death. But the five friends didn't manage to get enough exhibits together. "We're still looking for pictures, photographs, letters - in short all sorts of personal mementoes about Betty. Our exhibition has been planned for the last few years and we have written zillions of letters and bought hundreds of books, here in Germany, Europe and from the States," explains Wolfgang Hampel.They tried to get further information about their preferred author from American publishing companies. "Some didn't answer and others know less than we did already! It was like finding the different pieces of a jigsaw-puzzle without knowing what it will look like in the end." Why all this activity? "We think that Betty MacDonald is such a fascinating person that many people here should know more about her . Apart from our endeavors to our exhibition together we've also been in contact with publishers to convince them that a new edition of Nancy and Plum would find its readers still today. Betty MacDonald's readers come from all ages and social groups," says Wolfgang Hampel. Of course he and his friends know that Vashon is the Onions in the Stew Island and they also know that Vashon is part of the Pacific Northwest and - more specifically - of Puget Sound. So imagine their amusement when some publishing firms told them that Vashon is somewhere up to Alaska. Actually, Wolfgang Hampel knows quiete a lot about the Rock, though he's never been here. All his information comes from Betty MacDonald's Onions in the Stew. So he's got the idea of the terrific view of Mount Rainier, and he also knows about her coyness.Wolfgang Hampel has a pretty good impression about the house where Betty lived with her folks. "What we dearly need for our exhibition are pictures of the Island, books all sort of visuals to show people here in what a beautiful scenery Betty lived. So people can understand that she simply had to write books like that in such a fascinating rural enviroment.Wolfgang would be grateful for any help he could get from the Island. "Really, the most substantial help came from Vashon so far. We got some great personal impressions about Betty from Islanders who knew her." Wolfgang is amazed about the friendliness and amount of help and encouragement that reached him from the Rock. Still it's a long way until the exhibition is ready. Anyone with anything they'd like to send for the planned exhibition can write to Wolfgang Hampel.
Jennifer Jackson, Peninsula Daily News
Germany has the largest Betty MacDonald fan club in the world - http://bettymacdonaldfanclub.blogspot.com/ http://bettymacdonaldsociety.blogspot.com/ and Pat Bondurant has had phone calls from Heidelberg, inviting her and her husband to fly over and help celebrate the author's birthday.
Wolfgang Hampel and four friends began a worldwide research. In 1996 they visited all the places where Betty MacDonald and her family lived. Wolfgang Hampel interviewed Betty MacDonald's family and friends. One of our favourites is Betty MacDonald's very witty sister Alison Bard. She had never been interviewed before or afterwards. Alison Bard shares the most interesting info about life and work of Betty MacDonald. These interviews has been published on CD/DVD in 2009 by Betty MacDonald Fan Club and Betty MacDonald Society.
CECELIA GOODNOW Seattle P.I. Reporter
In Germany, Betty MacDonald's fame lives on - a fact that becomes clear after just a few minutes with the ebullient Wolfgang Hampel. ``I think Betty MacDonald is popular in Germany and Europe because she had a very hard life, but she could also smile, and she had for every situation a laugh," he said. ``Our life is tragicomedy, and she showed this. It's a masterpiece, her books. On his Seattle visit Wolfgang Hampel gathered anecdotes from relatives and friends, Wolfgang Hampel treasures such recollections. ``Everyone said to me, `She was the most wonderful person in the world I've ever met.'