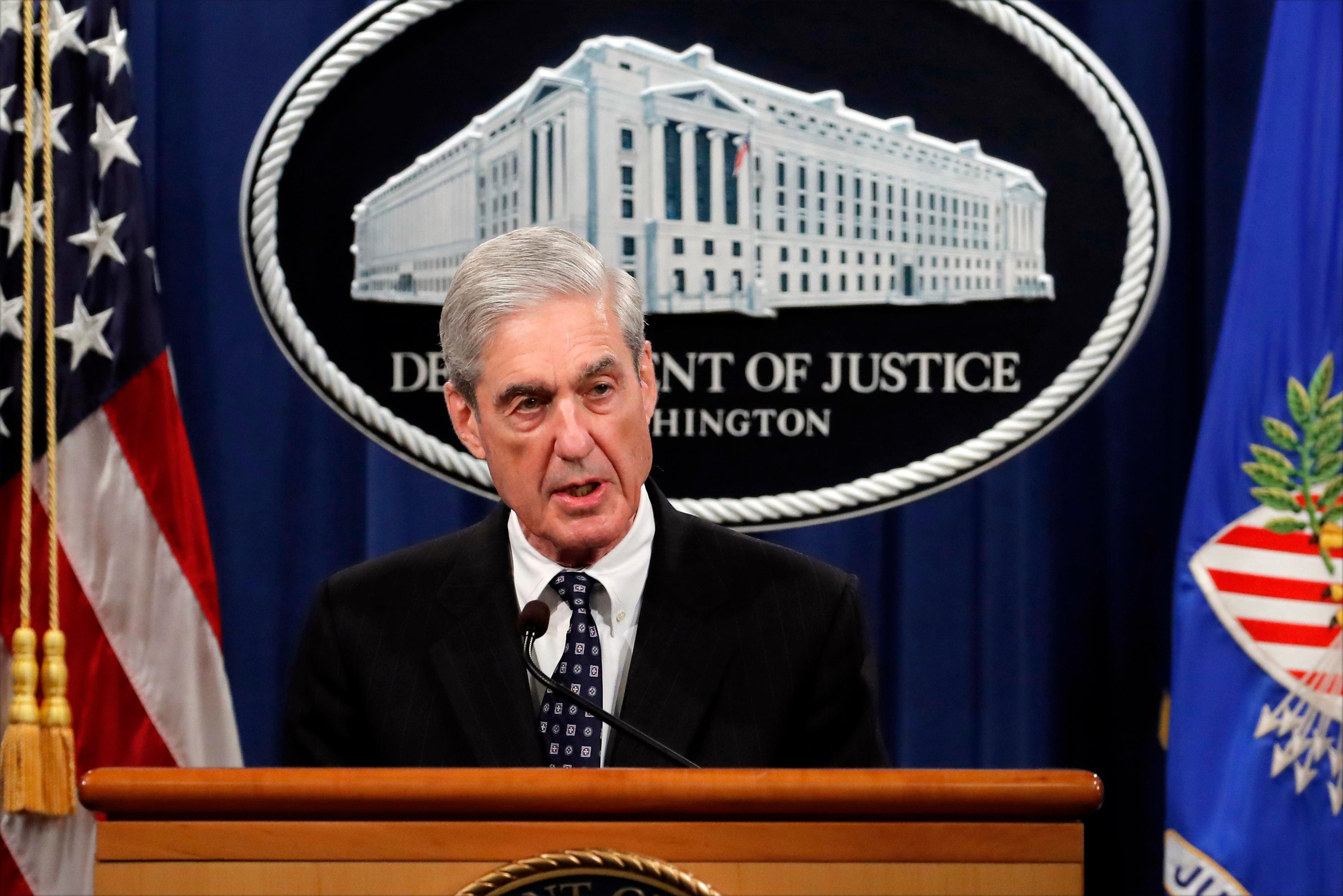 Mueller declares his Russia report did not exonerate Trump


WASHINGTON (AP) — Special counsel Robert Mueller said Wednesday that charging President Donald Trump with a crime was “not an option” because of federal rules, but he used his first public remarks on the Russia investigation to emphasize that he did not exonerate the president.
“If we had had confidence that the president clearly did not commit a crime, we would have said so,” Mueller declared.
The special counsel’s remarks stood as a pointed rebuttal to Trump’s repeated claims that he was cleared and that the two-year inquiry was merely a “witch hunt.” They also marked a counter to criticism, including by Attorney General William Barr, that Mueller should have reached a determination on whether the president illegally tried to obstruct the probe by taking actions such as firing his FBI director.
Mueller made clear that his team never considered indicting Trump because the Justice Department prohibits the prosecution of a sitting president.
“Charging the president with a crime was therefore not an option we could consider,” Mueller said. He said he believed such an action would be unconstitutional.
Mueller did not use the word ’impeachment,” but said it was the job of Congress — not the criminal justice system — to hold the president accountable for any wrongdoing.
The special counsel’s statement largely echoed the central points of his 448-page report, which was released last month with some redactions. But his remarks, just under 10 minutes long and delivered from a Justice Department podium, were extraordinary given that he had never before discussed or characterized his findings and had stayed mute during two years of feverish public speculation.

Special counsel Robert Mueller said Wednesday he believed he was constitutionally barred from charging President Donald Trump with a crime but pointedly emphasized his Russia report did not exonerate the president. (May 29)
Mueller, a former FBI director, said Wednesday that his work was complete and he was resigning to return to private life.
His remarks underscored the unsettled resolution, and revelations of behind-the-scenes discontent, that accompanied the end of his investigation. His refusal to reach a conclusion on criminal obstruction opened the door for Barr to clear the president, who in turn has cited the attorney general’s finding as proof of his innocence.
Trump, given notice Tuesday evening that Mueller would speak the next morning, watched on television. For weeks, he had been nervous about the possibility about the special counsel testifying before Congress, worried about the visual power of such a public appearance.
Shortly after Mueller concluded, the president who has repeatedly and falsely claimed that the report cleared him of obstruction of justice, tweeted a subdued yet still somewhat inaccurate reaction: “Nothing changes from the Mueller Report. There was insufficient evidence and therefore, in our Country, a person is innocent. The case is closed! Thank you”
While claiming victory, the tone of the president’s tweet was a far cry from the refrain of “total exoneration” that has dominated his declarations.
Mueller has privately vented to Barr about the attorney general’s handling of the report, while Barr has publicly said he was taken aback by the special counsel’s decision to neither exonerate nor incriminate the president.
Under pressure to testify before Congress, Mueller did not rule it out. But he seemed to warn lawmakers that they would not be pulling more detail out of him. His report is his testimony, he said.
“So beyond what I have said here today and what is contained in our written work,” Mueller said, “I do not believe it is appropriate for me to speak further about the investigation or to comment on the actions of the Justice Department or Congress.”
Mueller’s comments, one month after the public release of his report on Russian efforts to help Trump defeat Democrat Hillary Clinton, appeared intended to both justify the legitimacy of his investigation against complaints by the president and to explain his decision to not reach a conclusion on whether Trump had obstructed justice in the probe.
He described wide-ranging and criminal Russian efforts to interfere in the election, including by hacking and spreading disinformation — interference that Trump has said Putin rejected to his face in an “extremely strong and powerful” denial.
And Mueller called the question of later obstruction by Trump and his campaign a matter of “paramount importance.”
Mueller said the absence of a conclusion on obstruction should not be mistaken for exoneration.
A Justice Department legal opinion “says the Constitution requires a process other than the criminal justice system to formally accuse a sitting president of wrongdoing,” Mueller said. That would shift the next move, if any, to Congress, and the Democratic chairman of the House Judiciary Committee, which would investigate further or begin any impeachment effort, commented quickly.
New York Rep. Jerrold Nadler said it falls to Congress to respond to the “crimes, lies and other wrongdoing of President Trump — and we will do so.” House Speaker Nancy Pelosi has so far discouraged members of her caucus from demanding impeachment, believing it would only help Trump win re-election and arguing that Democrats need to follow a methodical, step by step approach to investigating the president. But she hasn’t ruled it out.
On the Republican side, Lindsey Graham of South Carolina, the chairman of the Senate Judiciary Committee, said that Mueller “has decided to move on and let the report speak for itself. Congress should follow his lead.”
Trump has blocked House committees’ subpoenas and other efforts to dig into the Trump-Russia issue, insisting Mueller’s report has settled everything.
The report found no criminal conspiracy between the Trump campaign and Russia to tip the outcome of the 2016 presidential election in Trump’s favor. But it also did not reach a conclusion on whether the president had obstructed justice.
Barr has said he was surprised Mueller did not reach a conclusion on obstruction, though Mueller in his report and again in his statement Wednesday said he had no choice. Barr and Deputy Attorney General Rod Rosenstein decided on their own that the evidence was not sufficient to support a criminal charge.
Barr, who is currently in Alaska for work and was briefed ahead of time on Mueller’s statement, has said he asked Mueller during a March conversation if he would have recommended charging Trump “but for” the Office of Legal Counsel opinion, and that Mueller said “no.”
“Under longstanding department policy, a president cannot be charged with a federal crime while he is in office,” Mueller said. “That is unconstitutional. Even if the charge is kept under seal and hidden from public view that, too, is prohibited.”
Mueller, for his part, earlier complained privately to Barr that he believed a four-page letter from the attorney general summarizing the report’s main conclusions did not adequately represent his findings. Barr has said he considered Mueller’s criticism to be a bit “snitty.”