Pictured: Hero French police officer's emotional partner who married him in hospital just hours before he died after being gunned down by ISIS terrorist 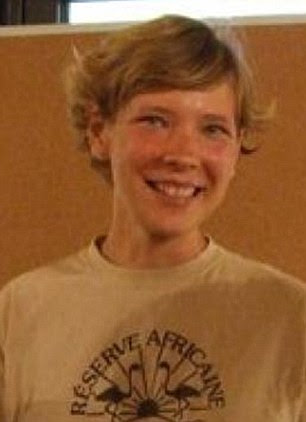 Marielle (pictured) was in floods of tears before the decorated officer succumbed to his wounds
The 'national hero' French gendarme gunned down by an Islamic State terrorist was married by a Catholic priest in the hours leading up to his death yesterday.
Lieutenant Colonel Arnaud Beltrame, 44, was barely breathing as the hugely moving ceremony was performed in a hospital in Carcassonne, south-west France.
His partner, Marielle, was in floods of tears as they said prayers before the decorated officer succumbed to his wounds.
Beltrame was part of the police team that raced to the supermarket in Trébes where terrorist Redouane Lakdim had taken hostages. He walked inside in an effort to free a woman who was being held as a human shield.
'He held his hands in the air, and suggested he would be a better hostage than a civilian,' said an investigating source.
'An element of trust was built up, and the officer managed to place his phone on a table while it was still connected to his colleagues outside. As the woman was released, shooting was heard, and that's when a specialist team went in to kill the terrorist.'

In the meantime Lieut Col Beltrame had been shot at least four times with a 7.65mm firearm and stabbed repeatedly around the top half of his body, including his head. French-Moroccan Lakdim, 26, had already killed three other people while screaming his support for IS before he attacked Lieut Col Beltrame.
Yesterday's marriage service was held close to where Lieut Col Beltrame had helped to end Friday's rampage. He had already undergone a civil marriage service with Marielle, a vet at the Sigean African animal reserve, near Narbonne, last year.
The couple had been planning a church wedding in June with family and friends, after meeting in 2016 during a guided tour of an abbey in France. 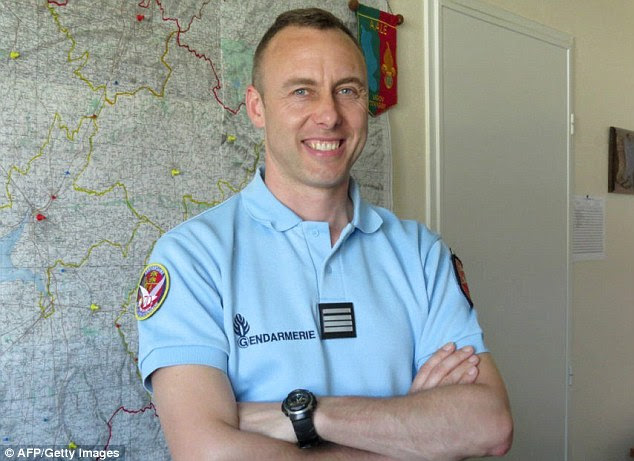 Arnaud Beltrame (pictured) was seriously wounded after agreeing to take the place of a female hostage during a terrifying stand-off in Trebes, France. He married his partner in a moving ceremony in hospital hours before passing away 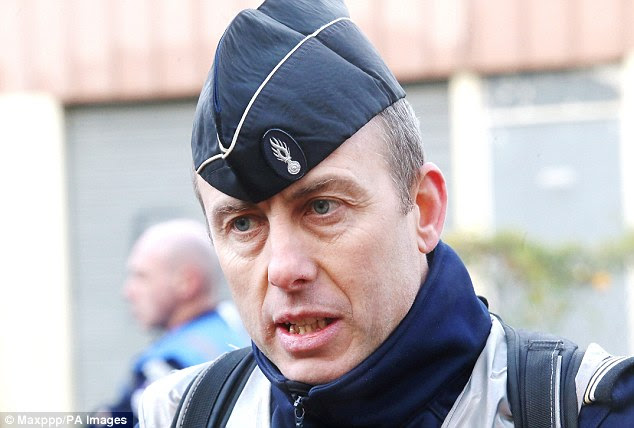 Forty-five-year-old Beltrame (pictured) was knighted the Legion of Honor in May 2012
Benedictine monk Father Jean-Baptiste yesterday described how the couple had already 'spent some 30 hours preparing for their marriage ceremony' in the summer.
Father Jean-Baptise said he had 'prayed that the marriage would take place', and he performed it just before reading out the last rites to Lieut Col Beltrame.
'I gave him the sacrament of marriage, and the sacrament of the sick,' he said, adding that the policeman was 'an extremely intelligent and courageous man' who had 'found his faith'. Prime Minister Theresa May said: 'I am saddened to learn that Lieut Col Arnaud Beltrame, the gendarme who took the place of a hostage in the attack at Trèbes, has died. His sacrifice and courage will never be forgotten.'
Lieut Col Beltrame's brother, Cedric, said his actions were 'beyond the call of duty'.
He added: 'He gave his life for strangers. He must have known that he didn't really have a chance. If that doesn't make him a hero, I don't know what would.' 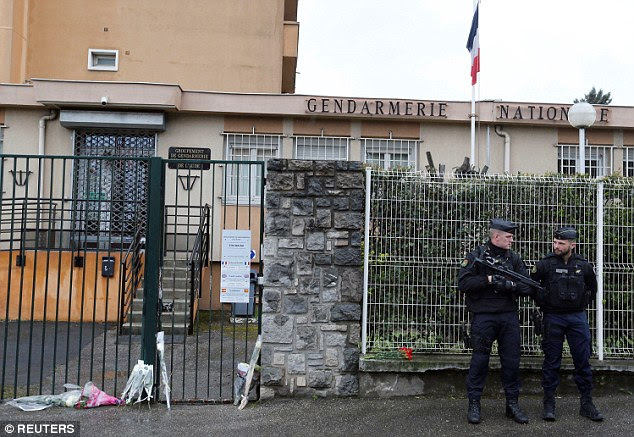 Armed officers stand guard outside the Gendarmerie Nationale in Carcassonne, where flowera have been laid in commemoration of Beltrame and his courageous sacrifice 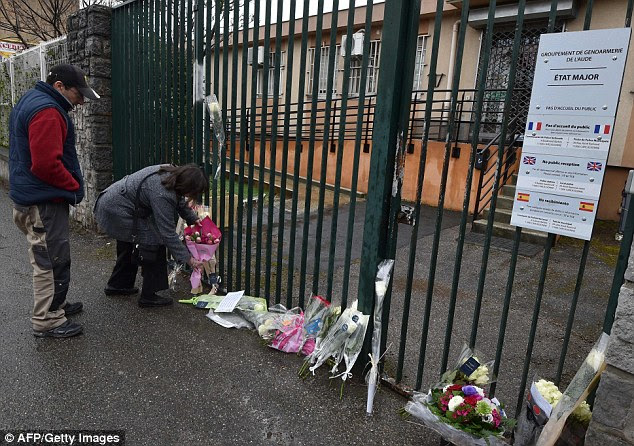 Beltrame's mother, who has not been named, said: 'He's someone who ever since he was born did everything for his country. He would tell me, 'Mum, I do my job. That's all.' '
French Interior Minister Gérard Collomb said Lieut Col Beltrame 'fell as a national hero' and 'died for his country'. French President Emmanuel Macron added: 'He saved lives and honoured his colleagues and his country.' 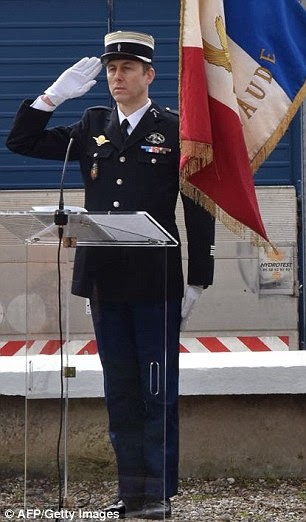 Beltrame (pictured) was a qualified parachutist who served in Iraq in 2005
Surgeons worked all night to try to save Lieut Col Beltrame, but his death was announced early on Saturday morning.
The manageress of Super-U, Samia Menassi, stayed with gendarmes outside the supermarket throughout the hostage ordeal to help them with the layout of the shop and possible whereabouts of the gunman. Ms Menassi told a friend: 'The police were incredibly brave. Without their courage and speed, it would have been carnage.'
It has since emerged that the terrorist was known to the French security services as a potential Islamist radical, but he had not been placed under surveillance.
He lived with his parents on a council estate in Carcassonne, and before carrying out the killings took one of his younger sisters to school.
Lakdim began his rampage by holding up a car in Carcassonne, 60 miles south of Toulouse, killing a passenger with a bullet to the head and then wounding the driver.
He then fired six times at four off-duty riot police officers who were returning to their base after a run. One officer was wounded in the shoulder. Lakdim then drove nine miles to Trèbes, where he stormed Super-U screaming 'Allahu Akbar [Arabic for 'God is the Greatest'], I'll kill you all'.
Among those murdered in the supermarket was a butcher, while dozens of others were wounded.
Mr Collomb described Lakdim as a 'radicalised petty criminal and small-time drug dealer'. 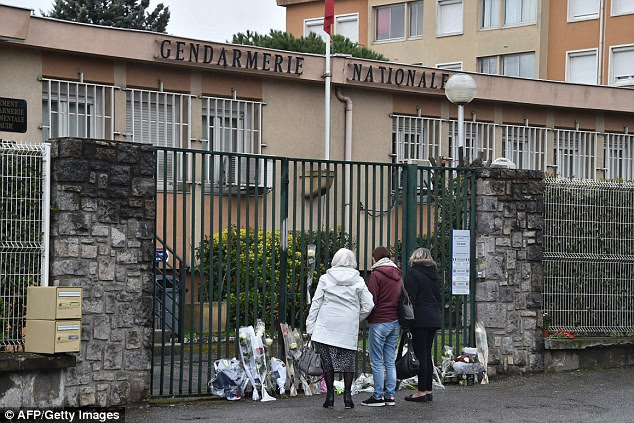 France was in mourning on Saturday and flowers were laid at the Gendarmerie Nationale in Carcassonne in tribute to the officer
During the siege, Lakdim called for the release of Salah Abdeslam, the only surviving member of the terrorist cell that carried out the November 2015 attacks on Paris, in which 130 people were murdered.
Abdeslam, 28, who is also from a French-Moroccan background, is currently awaiting trial in solitary confinement in a high-security prison near Paris.
IS described Lakdim as one of their 'soldiers', saying he was responding to the group's calls to target countries in the coalition carrying out air strikes against the so-called IS caliphate in Syria and Iraq.
France has been hit by a string of jihadist attacks since 2015 and remains on a high state of alert.
Trèbes is in an area popular with British second-home-owners and holidaymakers.

Share what you think
View all
The comments below have been moderated in advance.

Hard2tell, Maga, United States, a day ago
How could he consent to a marriage when he was barely breathing?

Phineasphinn, Hell, United States, a day ago
A true hero

Jay Aaron, Montreal, Canada, a day ago
A true hero

BIZZOBLOKE, Scarborough, United Kingdom, a day ago
Marielle be proud always of your heroic man. He will remain a legend to decent people all over the world. RIP brave man

up the workers, Manchester, United Kingdom, a day ago
He was and is a true hero no other word for him Rest in peace

emlo68, Manchester, United Kingdom, a day ago
Your wording of this article is a disgrace. Who wouldn't be emotional.

SteveBannon, Manchester, United Kingdom, a day ago
That is a brave man. I hope is family get all the support they need. God bless.

Pixy, Orpington, United Kingdom, a day ago
The word hero is used too often nowadays but in this case justified. A true hero.


1730
Click to rate
View all
The views expressed in the contents above are those of our users and do not necessarily reflect the views of MailOnline.