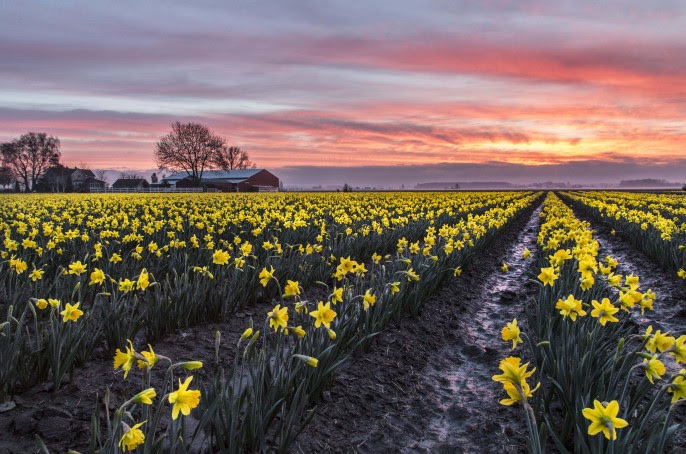 Perhaps the first plant I could recognize and name as a child was the daffodil, a welcome sight and fragrance after a long New York winter. And although native to the Mediterranean, daffodils (Narcissus species) have been in Virginia since at least the middle of the seventeenth century.
Beginning in the 1890s, Gloucester County became a center of daffodil production for much of the eastern United States. Much of this revolved around “wild” or naturalized daffodils that were cut and shipped north. By the middle of the twentieth century, this industry was rapidly dying off for a variety of reasons. But Gloucester County still has one daffodil breeder of note and continues to celebrate its floral heritage with the Daffodil Festival on the last weekend of March. More on that later.
The various Narcissus species, hybrids and cultivars are commonly referred to as either daffodils, jonquils or even simply narcissus, the latter especially when referring to the paper whites commonly forced indoors. The term jonquil is commonly used in certain regions for any daffodil, but technically refers only to one group that has narrow reed-like foliage. The various daffodils are divided into 13 divisions—or 12, if you believe some sources—that are based on flower shape and heritage. For example, Division 1 daffodils are called Trumpets, since the central portion or trumpet is quite long. Regardless of division, colors range from yellow to white, perhaps with some pink or orange in the trumpets. If you seek out specialty nurseries, hundreds of cultivars are available.


All daffodils have similar cultural requirements. As for the amount of sun they want, the more the better. Part sun, or about six hours per day, is sufficient, but less sun than that will lead to reduced blooming, even though the plants may soldier on for a long time. And sunlight in a deciduous woodland does not really count as full sunlight. As for soil, good drainage is important to avoid bulb rot. If your soil is unusually sodden, either amend it with gravel or put daffodils in a raised bed.
Daffodil bulbs should be planted at a depth equal to about three times their diameter, so a two-inch bulb should be six inches deep. Six inches is also a good distance between bulbs. Farther apart and they lose visual impact; closer, and they will require division sooner. Bulbs will look funny planted like soldiers in a straight line, so if you have ten bulbs, better to either plant them in two groups of five, or in a staggered double row. If you are planting a very large number, you can avoid an overly orderly appearance by picking up a handful and tossing them to the general area in which you wish to plant.
There are any number of “new, improved, back-saving!!” bulb planters out there. Use whatever works best for you, which might just be an ordinary trowel or even a garden shovel. And remember: nothing says you have to plant one bulb at a time. You can take a spade and dig up a good-sized hole with one or two punches, and then throw in three to five bulbs. For even larger areas, a rototiller might be the quickest option. And do the bulbs have to be pointy-side up? That’s the ideal, but the shoot will always get turned around and pointed toward the sky anyway. If you’re in a hurry, ensuring that the bulbs are at least on their side would be a good compromise.

Amending your soil with compost will definitely give your daffodils a boost, but there’s no need to fertilize when planting—which of course is not now, but in mid-to-late fall. In very early spring, a balanced fertilizer—about 5-5-5 or 10-10-10 is best—should be sprinkled around the plants just as their foliage emerges. (You can also do this in the fall, but that assumes you’ll remember where your daffodils are!) And speaking of feeding your daffodils, we all know what to do with their foliage, which is there to provide nutrients for the bulb, right? Doing nothing is perfectly okay. Or when the foliage turns yellow and lies on the ground, you can throw some mulch on it if the sight offends you. Do not cut the foliage off while it’s still green or tie it up in cutesy knots! That prevents movement of nutrients down to the bulb; plus, it takes a lot of valuable gardening time.

But back to Gloucester County. The annual Daffodil Festival takes place on the last weekend of March and includes the usual attractions: a parade, a queen, entertainers, a race, a car show, and of course, daffodils. (A full schedule is available on the county’s website. There’s also a link to the history of daffodil farming in this corner of Virginia.) On Saturday they will be running frequent buses over to Brent and Becky’s Bulbs for tours and shopping. Brent and Becky Heath own a business that has been in the family for several generations, at one time operating as the Daffodil Mart. Although they now sell many other types of bulbs, daffodils are still a specialty, with over 200 varieties available.


Once planted, daffodils tend to naturalize, meaning they spread slowly, but never seem to become invasive. Part of their secret to longevity might be their poisonous nature: deer and other critters don’t bother them, so you can enjoy your host of daffodils for many years.