a Betty MacDonald fan club member recently shared some very interesting Betty MacDonald photos including pictures of Betty as a child in a real Winter season with lots of snow.

We have a great Betty MacDonald fan club Winter surprise for you.

We've already built several snowmen during this Winter season but the Wisconsin dad was the best.

Thanks a million for your outstanding support.

As already mentioned we celebrated World Day of the Snowman.

Send us a photo of your favourite snowman and you can some very new interesting Betty MacDonald fan club items.


Betty MacDonald described Winter season in one of her unique books.


“ Big snowflakes fluttered slowly through the air like white feathers and made all of the Heavenly Valley smooth and white and quiet and beautiful.

Tall fir trees stood up to their knees in snow and their outstretched hands were heaped with it. Those that were bare of leaves wore soft white fur on their scrawny, reaching arms and all the stumps and low bushes had been turned into fat white cupcakes.”

Betty MacDonald described Winter season in a magical way but as we know Life can be rather hard on Vashon Island during Winter.

We got these messages from Betty MacDonald fans some years ago.

Guys it's much too cold for me!

I'm afraid I'm the Southern type although I know how much children and especially our children adore snow and really enjoy all these beloved Winter activities.

Very cold days in the State of Washington! Brrrrrrrrrrrrr!

We recently had a wind storm followed by some very low temperatures and a lot of snow.
Vashon Island had a power outage for a few days. My sister was without power from Monday evening to Thursday before noon.
The next week is supposed to be above freezing, rain and occasional sun-breaks.
Old timers on the Island had kerosene lamps and wood stoves and plenty of wood just for this type of situation.

We had a bit of snow and cold around here and mother had to put up with no electric power or heat for two days but seems cheerful about it all.

We have just gone through an Arctic Express. Extremely cold and snowy on Vashon Island. Broke records for low temps. I was without power for 24 hours, many much longer. Today is much warmer and the snow is almost gone.

We have had bad storms that brought down some of the big trees on houses and power lines. We have had long hours and days without power, and the temperature got down to 15 degrees F. No sun, but today it is raining and the snow and ice are melting.

For one week here it's been verrrrry cold from zero with wind chil to now finally 40 degrees. Seattle was almost shut down due to bad ice. We cancelled plans to go to Sequim, which is not far from where Betty lived the story of the EGG AND I. Too cold, too much snow, windy, and icy. So we stayed home and roasted a duck!!

We're not seeing the sun yet! At least it isn't raining. It's impossible to walk every day in this weather. I usually go out for 45 minutes a day.

This is an interview with Elizabeth an owner of a traditional Mongolian Ger (yurt).

Elizabeth has been living in her yurt since early last fall through the rainy NW winter on Vashon Island. 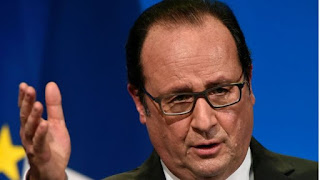 The French people are frustrated and getting increasingly angry, and this anger has been building for two decades or so. Unemployment has remained high even during good times, as the country's northern industrial base has been hollowed out by globalization. Globalization which, by the way, was mandated by trade policies which the French government abdicated responsibilities on to the EU.

Previous to 2010, France made up for this by increased public spending. However, after the sovereign debt crises of 2010, France is now being held to EU restraints on budget deficits, which means 'austerity.'

What about monetary stimulus? Well, that's out of France's hands, too, because they've abdicated their central bank responsibilities to Brussels and the ECB.

Do you now see France's dilemma? French policymakers are held in a straight jacket. France has lost control of its own economic destiny, and its leaders are powerless to respond to economic decline with the tools nation states traditionally use. To add insult to injury, the "migrant" nonsense means that France now has to take care of tens of thousands, maybe hundreds of thousands, of freeloading immigrants who mostly go straight to welfare or squat on property in Calais.

Voters have responded by going to Front National. Francois Hollande understands this, and he is now acting to do something. Of course, a tiny, 2 billion Euro "jobs package" isn't even going to be a drop in the bucket. This is largely a publicity stunt by which he is trying to convince voters that the Socialists are actually able to do something. They can't.

Posted by Feminist Safe Zone at 10:54 AM 2 Comments 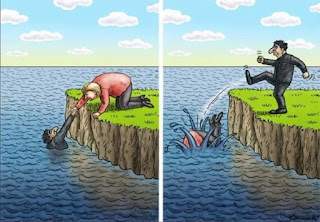 According to inside sources in the Bundestag, 'senior members' of the Christian Social Union will team up with rebelling CDU MPs and send Merkel a confidential letter early this week. The letter will demand national border control. Signatories are threatening to petition for a parliamentary vote on closing the country's borders if their demands are not met.
This is a huge deal because most polls consistently show nearly 60% of Germans disapproving of Merkel's disastrous handling of the "migrant crisis."
I believe that the CDU, along with the conservative wing of the CSU, are scared shitless of the rise of right-wing Alternative for Germany. If this report is confirmed, then the CDU and CSU are clearly working to prevent being 'outflanked' by AfD, and are doing so by adopting AfD's stance.
Posted by Feminist Safe Zone at 11:05 AM 0 Comments

Horst Seehofer to the Rescue? 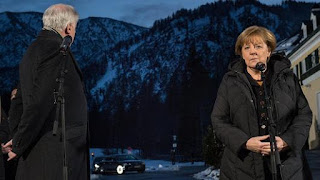 Horst Seehofer is back, demanding Merkel restore order to the border and threatening to take her to federal court over the matter. This isn't the first time Seehofer has made demands, and if he were to back down on this threat, it wouldn't be the first time he's done that, either.

Seehofer's demand is newsworthy, however, because it comes just days after 40 CSU MPs rebelled against Merkel and called for an effective halt to migrant flows. I believe that Seehofer senses Merkel's weakness and is 'joining the rebellion' in his own way. I suspect that the two 'errant' ministers, de Maziere and Schaeuble, could put additional pressure on Merkel in the coming weeks.

We'll see where this leads, but one thing is for certain, Merkel's grip on power is weakening. There are huge protests happening all over Germany, too many protests to cover on a regular basis, and people are screaming for Merkel's resignation. The German people are getting angrier by the day, and the situation on the ground is very fluid. Stay turned for more updates.


Posted by Feminist Safe Zone at 9:21 AM 0 Comments

Wittenberg, WI -- A Wisconsin man took the mounds of snow piling up in his yard and turned it into something that's now warming hearts everywhere. "It's a lot of work, but it's worth it,” said Paul Dahms, Wittenberg resident."Lots of cars driving by and lots of people saying it looks really cool."
This giant "Olaf" snowman stands about 22 feet tall and 12 feet wide at the base.
Dahms his daughter gave him the inspiration to build the famous snowman from the movie Frozen.
"Lainey wanted a snowman, so I said I'd build her one and she kind of was with the whole Olaf kick this year; I tried to shape it or get it as close to Olaf as I could."
He says he began building it in December, adding a little more each snowfall.
"The first two sections, snowblowed everything into the driveway into one spot and then just kind of shaping it up from there,” he explained.
He used a variety of tools to create Olaf's distinctive grin.
"If you look at Olaf's head it's not the straightest thing in the world and trying to get the angle and stuff like that was a little harder than I thought, but I did it the best I could,” he said.
After 50 total hours of work Dahms finally finished his “Frozen” masterpiece on Friday, much to the delight of the neighborhood.
"I think he's terrific,” said Pat Boldig, neighbor.” I think Olaf is just cute.”
Dahms said it's those reactions that make his hard work so rewarding.
"Just for my daughter to enjoy and anyone else who wants to come by and look at it to come by and take pictures with it,” Dahms said.
Showing it might take something frozen to make this season a little warmer.
"It makes winter go by just that much faster,” Boldig.


Filed in: News
Suggest a correction

Posted by Betty MacDonald Fan Club at 1:51 AM