Betty MacDonald and an important question

regarding Betty MacDonald fan club birthday card contest there are some more info.


The winner who sent the best and most original birthday card will be Honor guest of the next International Betty MacDonald fan club event.

You'll be able to see wonderful cards for Betty MacDonald with very touching messages for example by her daughter Joan MacDonald Keil or her good friend Monica Sone.

There will be a Betty MacDonald fan club birthday event DVD available.

Betty MacDonald mentioned her favourite flower in one of her books.

Join us in voting for your favourite city, please.


We are so happy that our 'Casanova'  is back.

Any news about his very beautiful girlfriends?

I adore Betty MacDonald's Onions in the Stew.

This great singer could be very successful in ESC 2016.


German Chancellor Angela Merkel, Time magazine’s “person of the year” in 2015, is facing her biggest political crisis as her welcoming of Mideast refugees has troubled and angered many Europeans, raising the possibility that Merkel’s days as the Continent’s undisputed leader may be numbered, writes Gilbert Doctorow.

By Gilbert Doctorow
The online edition of Bloomberg News carried a lead story entitled “Merkel in Peril with Window to Tame EU’s Refugee Crisis.” It was a commendable effort to flag the possibility of political change at the top of Europe’s leading country, a prospect that most mainstream U.S. and even European media still overlook.
In the article on Thursday, the writers took into account the direct challenge to Merkel’s open borders’ policy on refugees coming from the Christian Social Union (CSU), the Bavarian sister party of Merkel’s Christian Democratic Union (CDU). Bavarian Premier Horst Seehofer disparaged Merkel’s failure to make the slightest concession to her detractors when she spoke to a CSU gathering in Wildbad Kreuth on Wednesday. He concluded, “We’re looking at some difficult weeks and months ahead.” 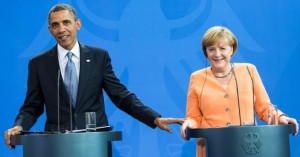 In the past six months, "We can do it" has been Angela Merkel's mantra on the refugee crisis. She will not budge from that standpoint, no matter how much pressure is mounting on her.

She has been chancellor for over 10 years and head of her party, the Christian Democratic Union (CDU), for over 15. She has seen government leaders throughout the world come and go. In May 2015, "Forbes" magazine named her most powerful woman in the world for the fifth consecutive year. She did indeed lead Europe in the EU's financial crisis and in the ensuing European debt gamble; there was no way of avoiding the German chancellor back then. And now?
Angela Merkel is now troubled, domestically and on a European level. How did things end up this way? Did the Chancellor misjudge the situation? "Europe as whole must take action; the states must take on responsibility for refugees seeking asylum," she demands, as she always has in the past. Yet the majority of EU states refuse to do so, despite the appeals. An attempt to share the burden has obviously failed and, with it, Angela Merkel's political plan.
Sweden, Austria and Germany were the states that have, until recently, taken in the greatest number of refugees . However, the Scandinavians and Austrians used the emergency brake and decided to restrict a further influx of people. And Germany? Merkel will not hear of a cap for migrants. She has argued that this cannot be achieved on a unilateral level and has also thought about the consequences: Must German tanks patrol the border and even shoot people who refuse to be sent away?
Merkel has always been successful with her objective and low-key approach to problems and the way she extensively analyzes them in order to find logical and transparent solutions. People say the physicist has no room for emotions. Yet, last summer, when a growing number of Germans got involved in refugee support measures and a "welcome culture" until then unseen in the country was spreading, it seemed that the chancellor had infected the people with her enthusiasm. "Germany is a strong country," she said. "We can do it."
September 5 and beyond
The chancellor would lose credibility were she to change her mind about that decision. At the same time, Merkel was aware early on that the arrival of large numbers of refugees could not be compared to any political challenge in recent times; it was a historical turning point. According to estimates, last summer 800,000 refugees were expected to arrive in Germany. "We stand before a huge national challenge that will be a central challenge - not only for days or months, but for a long period of time," she said.
Did the Chancellor already know that in five days, she would do what critics still rebuke her for?
Praise poured in for the German government, and especially Merkel, through social networks. She was immediately idolized and called "Mother of all believers" because she had "invited" Syrians to Germany and welcomed them with open arms. And, indeed, the next day many Germans were waiting to warmly welcome the refugees in places like Munich's central train station. Images of the volunteers quickly spread around the world but the Bavarian State Premier Horst Seehofer was grumbling that Merkel had made a mistake.
That marked the beginning of a political conflict that has made Merkel look much weaker than she would were her own party to stand behind her united. Seehofer's Christian Social Union is the Bavarian sibling of Merkel's CDU, and the two parties work together on a national level. The CSU's open disapproval upset Merkel, and she responded by saying that "if we now have to start apologizing for showing a friendly face in response to emergency situations, then that's not my country."
Ever since then, the two camps have become entrenched in their positions and no one has budged. The CSU, however, still has the strength to continue criticizing Merkel's refugee policies. The only difference now, compared to in autumn, is that the CSU has developed concrete proposals, such as not allowing more than 200,000 refugees to enter the country. Merkel's own party has also found advocates of such a cap.
But Merkel perseveres. At the CSU congress on January 20, the party expressed its disappointment over her lack of compliance. The CSU is now threatening to bring proceedings before Germany's Constitutional Court to allow border patrols. Merkel has until March to change her position. If she does not act, the CSU could, as a consequence, terminate the coalition with the CDU and then exit the government. Then, Merkel would no longer be chancellor.
Is Angela Merkel left with only with a choice between power and loss of face? Or will there be a European solution? Right now, no one has answers to these questions.

Germany's largest police union has said plans to extend border controls indefinitely are unworkable. Temporary checks have been used in Germany and other EU nations to stem refugee arrivals. (22.01.2016)

Posted by Betty MacDonald Fan Club at 12:01 AM