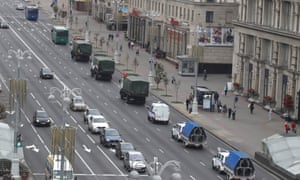 Belarusians are preparing for a second Sunday of massed rallies against Alexander Lukashenko, after the country’s authoritarian president told his military to be on full combat alert to deal with supposed external threats.
Last Sunday saw the biggest demonstration in the country’s recent history, over Lukashenko’s rigged election win and subsequent police violence against protesters. The protest has continued throughout the week, with the riot police largely absent, but Lukashenko has promised to “solve” the issue of protests within a few days, leaving some wary of a new crackdown.
This Sunday’s rally, dubbed “the march for a new Belarus” by its organisers, is meant to show that the protest movement is not losing steam, and events are planned in the capital, Minsk, and cities across the country. However, rainy weather as well as measures taken by the authorities, including putting roadblocks at the entrances to Minsk, may reduce the turnout.
While last Sunday the strength of the protest made the regime appear to be tottering, over the week Lukashenko has reasserted control. On Saturday, he addressed a rally in the western city of Grodno, where a carefully assembled crowd cheered him and waved the red-green national flag. He told the crowd that without him the country would collapse in the face of foreign aggression. He said: “We would no longer be our own masters on this square. They would have already chopped us up, chewed us up and spat us out.”


Lukashenko denounced the protests as backed by western countries, and ordered the army to defend western Belarus.
He also visited a military range, where he suggested Nato troops were preparing to invade. “The fatherland is in danger,” he said, denouncing the protests as backed by western countries. “It involves taking the most stringent measures to protect the territorial integrity of our country,” he told commanders.
Lukashenko reiterated that he had asked Russia’s president, Vladimir Putin, to intervene and help. Putin has so far refrained from direct intervention but on Friday held a meeting of his security council to discuss events in the country.
Nato put out a statement on Saturday denying any military buildup on the border with Belarus. “As we have already made clear, Nato poses no threat to Belarus or any other country and has no military buildup in the region. Our posture is strictly defensive. We remain vigilant, ready to deter any aggression and defend our allies. We call on Minsk to demonstrate full respect for fundamental rights,” said Oana Lungescu, the alliance’s spokeswoman.
The European Union has denounced the Belarusian election as invalid, and called on Lukashenko to negotiate with opposition leaders, including Svetlana Tikhanovskaya, who stood against Lukashenko for the presidency but fled to Lithuania the day after the vote after receiving threats.
The US deputy secretary of state, Stephen Biegun, was due to visit Vilnius next week and meet with Tikhanovskaya, her representatives told journalists.
On Friday, Tikhanovskaya gave her first press conference since leaving Belarus, in which she said she would return to the country only when it was safe for her to do so. Belarusians “would never accept” Lukashenko’s continued leadership, she said.

How the two flags of Belarus became symbols of confrontation

Lukashenko has made it clear that he does not plan concessions, handing out awards to KGB and riot police involved in the recent crackdown for “impeccable service” and saying he would rather die than hold new elections. His prosecutors have launched a criminal case over the creation of a coordination council set up by opposition leaders to oversee a potential transition of power. Two of its leaders were called to questioning by investigators on Friday.
Protest leaders insist this will not deter them, and say they are ready for the long haul.
“We know it won’t finish immediately and we know we have a journey ahead of us,” Pavel Latushko, a former culture minister who sits on the new coordination council, told the Guardian on Friday. “But it won’t be a long journey. People won’t agree to live in the old way again. Even if they manage to extinguish the protest today, then tomorrow it will re-emerge with even greater force.”

Posted by Betty MacDonald Fan Club at 6:05 AM