Extreme Winter in some parts of U.S.

Extreme weather is so bad in some parts of the country, even the US Postal Service won't be going out

(CNN)"Neither snow nor rain nor heat nor gloom of night stays these couriers from the swift completion of their appointed rounds," the saying goes.
But whoever said that didn't face weather of the kind predicted for Wednesday. So postal workers won't be out delivering anything in six entire states, and parts of four others.
The US Postal Service said Tuesday night on Facebook that because of the predicted deteriorating weather conditions in the Midwest, delivery will be suspended in some areas.
The list of regions and states affected: Illinois, Iowa, Minnesota, North Dakota, South Dakota, Wisconsin, and parts of Kansas, Missouri, Montana and Nebraska.

Even for the hardiest, cold-tested Americans, this week's deep freeze is brutal, with dozens of temperature and wind chill records expected to occur from the Dakotas to Long Island, leading to warnings for people to stay inside.
In Minnesota, blustery weather could mean wind chills that could approach 70 below.
"These are VERY DANGEROUS conditions and can lead to frostbite on exposed skin in as little as five minutes where wind chill values are below -50," the National Weather Service office near Minneapolis and St. Paul tweeted. "Best thing you can do is limit your time outside."
A mammoth blast of frigid air sweeping through the Midwest is headed toward the East, on track to shatter dozens of records along the way. And it can be deadly, with the weather blamed for three deaths this week.
"The coldest air in a generation is sinking south, with below-zero temperatures already in the Upper Midwest," CNN meteorologist Dave Hennen said Tuesday. "And the worst yet to come."
The bitter weather has also snarled travel in even the hardiest cities. More than 2,700 flights involving US airports are canceled for Tuesday and Wednesday, including more than 1,550 in and out of Chicago airports, according to FlightAware.com.
Millions of Americans grappling with the cold would be better off warming up in parts of Antarctica.
Chicago could reach a record low temperature of 27 below zero by Thursday morning. The city's daytime high on Wednesday might only reach 15 below zero. 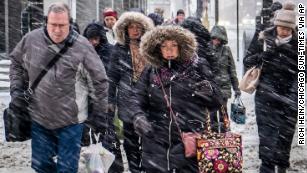 'If there's global warming, why is it so cold?' Here's why
Compare that to the relative warmth of Priestley Glacier, Antarctica, which will have a Wednesday high temperature of 6 degrees Fahrenheit and a low of 7 below zero.
While Hennen said Chicago will be "the epicenter of the extreme cold," its misery will have plenty of company.
Temperatures will plunge to 20-40 degrees below zero between Tuesday and Thursday in the Upper Midwest and Great Lakes, Hennen said.
Roughly 212 million, or 72% of the continental US population, will see temperatures drop below freezing over the next few days. And more than 83 million Americans -- about 25% of the US population -- will suffer subzero temperatures sometime between Wednesday and Monday.

So cold the deicer froze

Grand Forks County Sheriff Andy Schneider said many businesses in his North Dakota community were closed but there were a few grocery stores and gas stations staying open.
But if people need to go get bread and milk, he advised putting on long johns and other layers. If you don't, "it's not very safe," he said. 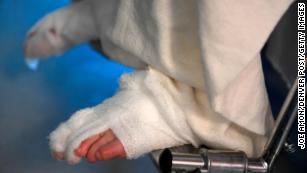 What to know about frostbite
Schneider said many of the calls his department was answering were for motorists stuck in ditches. But people were unable to get going for other reasons.
"Bigger vehicles like UPS trucks and garbage trucks or semis are stalling out," he said. "Their fuel is gelling up and their engines can't run."
He said there were also planes at the airport that couldn't take off because workers would spray deicer on them and the liquid would freeze, too.
The wind chill at Grand Forks International Airport was 61 degrees below zero, the National Weather Service said. That's from an actual temperature of 25 below and a wind gust of 44 mph.

The only numbers more shocking than the temperatures are the wind chills. 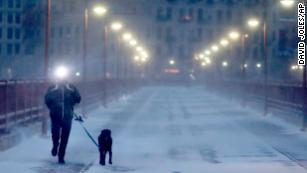 Yes, wind chill is a real threat. It can and will harm you.
Wind chills will plummet to 30-70 degrees below zero this week in parts of the northern Plains and Great Lakes region, Hennen said.
In northern Minnesota, wind chills were forecast to drop to 65-70 degrees below zero, which would rival the coldest wind chill ever recorded in the state (71 below) in 1982.
In its 8 p.m. update, the National Weather Service said the municipal airport in Benson, Minnesota, recorded a wind chill of 62 below.
Illinois Gov. J. B. Pritzker declared a state of emergency, saying even a brief time outside with exposed skin can be life-threatening.
"There is a real risk of hypothermia and frostbite," Pritzker said Tuesday. "Even five minutes of exposure can have very severe health consequences."
Chicago might stay below zero from Tuesday all the way until midday Friday, Hennen said. 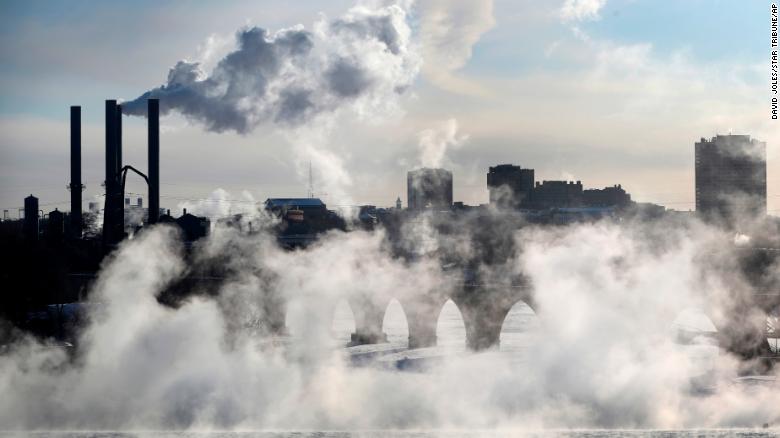 At least 3 deaths are linked to weather 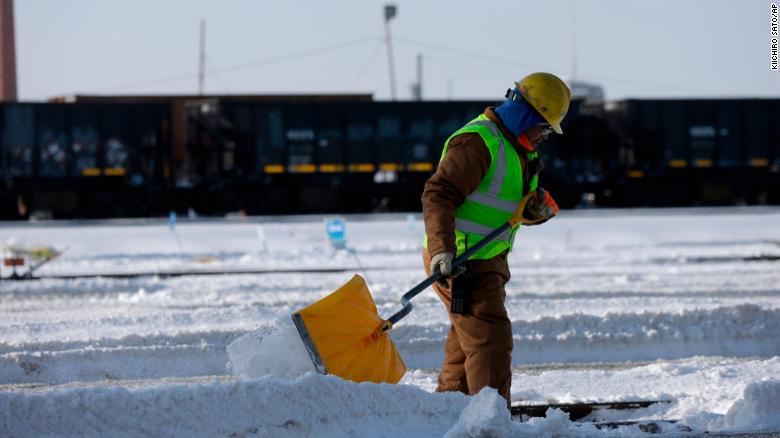 A worker shovels snow off the rail switches at the Metra Western Avenue Yard in Chicago.
Authorities are urging people to bundle up, stay inside and check up on the elderly and vulnerable.
But already, at least three deaths have been attributed to the extreme cold.
The latest storm-related fatality was a 55-year-old man who was found dead Tuesday in the detached garage of his Milwaukee home. The man apparently collapsed after shoveling snow, according to the medical examiner's office.
On Sunday, a man in Rochester, Minnesota, was found dead outside the home where he was staying with a relative.
Ali Alfred Gombo, 22, didn't have keys to the home and was unable to enter after being dropped off outside early Sunday morning, CNN affiliate KIMT reported. The single-digit temperatures that dipped below zero may have played a role in his death, Rochester police said.
And in Illinois, a man was killed Monday "after a roadway crash involving a village plow truck and a pedestrian," Libertyville police said.
The plow truck driver has been placed on paid administrative leave pending the results of an investigation, police said.

What about the Super Bowl?

In Atlanta, where the New England Patriots are set to face the Los Angeles Rams in the Super Bowl this weekend, a possibility of snow prompted many places to close on Tuesday.
But the city avoided any measurable snow, as a line of light rain moved through during the morning.
Temperatures are expected to rebound to near 60 degrees before Sunday evening's kickoff at Mercedes-Benz Stadium.