(CNN)It's as if President Donald Trump's humiliation over the government shutdown and his failed push to honor his core campaign promise never happened.
"Does anybody really think I won't build the WALL? Done more in first two years than any President! MAKE AMERICA GREAT AGAIN!," Trump tweeted on Sunday night, hitting back at the overwhelming media consensus that he had been outplayed by House Speaker Nancy Pelosi.
But whether the President is simply defiant or in denial or is yet to process the lessons of the 35-day impasse that ended with his capitulation on Friday, he's facing wrenching political choices.
Going forward, he would have to adopt a fundamental change of approach if he is to wring money for his border wall from Congress and revive a presidency badly damaged by his loss to Democrats in the first clash of the new era of divided government.
But any new strategy will expose the President to significant political risks and require an ability to work the levers of power in Washington that Trump was unable to show even when the GOP had a monopoly on congressional power.
And most dauntingly for the President, a genuine deal with Democrats would require concessions that would force him to do something he's never dared to do: risk angering his ultra-loyal political base. 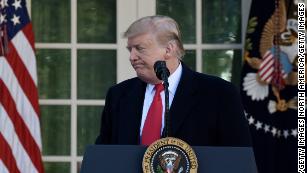 Inside the White House, aides and advisers are despondent over a wasted month
The unpleasant reality now facing Trump, and the unchanged political dynamics that provoked the shutdown, are why Washington appears headed for a second one -- or a bid by Trump to short circuit Congress by using executive power to build the wall that could cause a constitutional firestorm.
The President's dilemmas will play out during a three-week short-term funding truce reached Friday to end a shutdown that left 800,000 government workers without multiple paychecks on-time and the nation's federal infrastructure in chaos.
Negotiations will take place between a panel of Republicans and Democrats from the House and the Senate in a search for a border security plan that everyone can sign off on.
But in an interview with the Wall Street Journal Sunday, the President held out little hope the talks would work.
"I personally think it's less than 50-50, but you have a lot of very good people on that board," he said, adding he doubted he would water down his demand for $5.7 billion in wall funding.

Trump warned on Friday that if he didn't get a "fair deal" on money for a wall that Democrats vehemently oppose by February 15, government would close again or he'd invoke emergency powers to build it.
Trump's refusal, so far, to moderate his position does not take into account damage to his political standing in a shutdown that now looks like a grave miscalculation.
The impasse aggravated moderate voters and damaged his poll numbers, as well as united and emboldened Democrats. Trump's climbdown threatened his standing among his grass roots army for whom his wall is an almost mystical rallying cause.
So a second shutdown could turn into an even bigger disaster for Trump.
For one thing, Capitol Hill Republicans who were frustrated with his strategy over the last month might think twice about following the President into another political dead end.
"I don't know how any member of the administration or of Congress could think that a shutdown was a worthy pursuit. It never is," Sen. Susan Collins, R-Maine, said on CBS "Face the Nation" on Sunday.
And Pelosi, basking in her victory, seems even less open to offering Trump the kind of congressional compromise that could allow him to say he got money for the wall and for Democrats to argue they had funded border security.
"Have I not been clear on a wall?" the Speaker asked on Friday.

Trump in a political jam

Signs that the sides are as entrenched as ever explain increasing expectations that the President will declare a national emergency or take some other executive action to reprogram money to fund the wall when the clock runs out.
"At the end of the day the President is going to secure the border, one way or another," Trump's acting chief of staff Mick Mulvaney said on "Fox News Sunday."
But what would be a certain court battle and a limit to the amount of funds that the President could juggle means such a strategy might save political face and unite his base but is unlikely to lead to swift wall construction that could boost his 2020 re-election race.
This political jam is the reason that the President now faces a crossroads that could fundamentally alter the character of his presidency and change the foundation of a political crusade that is based on scorched earth immigration rhetoric.
The last few weeks have made clear that Democrats who run the House of Representatives are not going to give Trump anything that looks like his campaign vision of a border wall without getting something serious in return.
They would likely require Trump to offer something on the scale of permanent protection for undocumented immigrants brought to the US as children and even a path to citizenship for a group known as Dreamers.
Trump offered a temporary shield to DACA recipients and other migrants covered by Temporary Protected Status (TPS) for three years in a bid to break the deadlock in the government shutdown negotiations.
But Democrats refused, reasoning that temporary protections from deportation in return for a permanent wall was hardly a good deal.
Even that limited offer drew fury from some of Trump's traditional cheerleaders on the right. Putting permanent status on the table for any undocumented migrants could cause a firestorm among supporters who see any such move as "amnesty."
The changed balance of power in Washington has put Trump in a deeply ironic position that, to get the wall, he might have to do something he's never done before: risk his connection to his base.

Could the White House go big?

Florida Sen. Marco Rubio -- while stressing the need to first guarantee border security -- thinks that the White House may be prepared to go far bigger than most people think as Trump seeks to fulfill his core campaign promise.
"I believe he's willing to go even further and do something reasonable with people who have been here a long time unlawfully, but are not criminals," Rubio told Jake Tapper on CNN's "State of the Union." 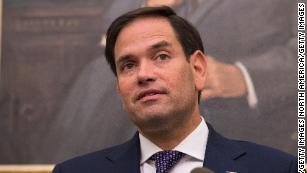 Rubio: 'I don't think shutdowns are good leverage'
Rubio, more than most lawmakers, understands the treacherous journey that Trump would face -- since his own presidential prospects were eviscerated by his past willingness to compromise on the issue.
Trump has repeatedly balked on the threshold of swapping DACA protection for money to build his wall, in apparent concern about how his base would respond, even when Democrats were willing to spend $25 billion on border security that he could have spun as funding for the wall.
It's long been a mystery why Trump, who enjoys a bond with his political base unlike any other recent President has been unwilling to test the limits of that loyalty. After all, though media figures like Rush Limbaugh, Ann Coulter and Mark Levin enjoy huge audiences, no one has ever electrified the populist, nationalist conservative movement like Trump.
And if any Republican President has the political credibility to lead the base to an immigration compromise, it would be Trump.
But the President has rarely made any attempt to reach out to voters beyond his own coalition -- apparently believing he can repeat his narrow path to 270 electoral votes that defied all the pundits again in 2020.