Mrs. Piggle-Wiggle and a flashlight under the pillow


Books and a flashlight under the pillow!  Excellent!

Betty MacDonald wrote four Mrs. Piggle-Wiggle books between 1947 and 1957, all of which pointed out bad behavior in children and illustrated ways to modify it. 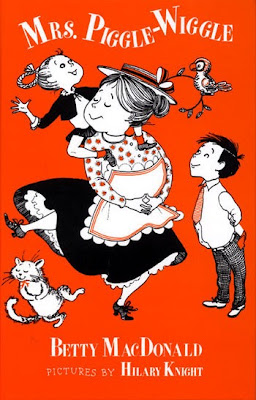 During the years that we read a lot of Mrs. Piggle-Wiggle, I went from finding the books archaic and ponderous, to scathingly satirical, to straightforwardly hilarious.  I still love the books now, although I know they can be an acquired taste. 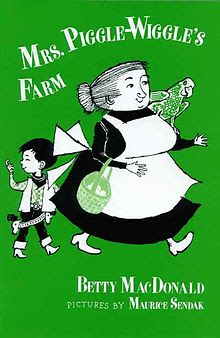 Mrs. Piggle-Wiggle is a charmingly eccentric (but wise!) little woman who lives in a house that has been built upside down, with chandeliers rising from the floor.   She plays with all the neighborhood kids, who have free run of her house and possessions, and counsels the parents how to stop the children's bad habits, which are legion.  The structure of almost every chapter is the same: we meet a new child, discover his or her intolerable (to the parents) vice: extreme selfishness, aversion to bathing, tattling, dishonesty, etc.  Someone mentions that Mrs. Piggle-Wiggle might have the answer, and the rest of the chapter is devoted to her "cure."  In our household, the first mention of her name was usually shouted out by all listeners.   In two of the books all the cures are behavioral; the two others introduce magic.  I'm sticking to the non-magical today.

"The Radish Cure" deals with Patsy Waters, who refuses to bathe.  Mrs. Piggle-Wiggle counsels her parents to wait until the dirt on Patsy is deep enough to sprinkle her with radish seeds while she sleeps.


When they had finished and were standing by her bed gazing fondly at their handiwork, Patsy's father said, "Repulsive little thing, isn't she?"

The dads often get to say the little zingers.

Patsy, unphased by dirt, is horrified by green radish sprouts and demands to bathe.  Problem solved.

The names are part of what won me over to MacDonald's nutty sense of humor.  Corinthian Bop, Enterprise Beecham, Jimmy Gopher, Electra Rockstall and my favorite, Paraphernalia Grotto, all have appearances.  The upwardly-climbing Foxgloves name their sons Harvard and Cornell; the daughters are Melody and Emmy: this is the Fifties.  The moms are all full-time moms, baking cookies and talking with the other moms about their children.  Dads are consulted on the phone, want to read the evening paper more than engage with their families, and forget Mrs. Piggle-Wiggle's name ("Call that Mrs. Wriggle-Spiggle.").  But as this theme goes through story after story, I start suspecting MacDonald of being a proto-feminist social critic.

The story that provoked the most glee in our house was "The Fighter-Quarrelers Cure," about the constantly bickering Russell twins, Anne and Joan.  Mrs. Piggle-Wiggle tells the parents to take notes on the girls' fights and then act them out the next day.  So the day starts with the mother screaming to her children that the father has told her there's a spider in her bed (Joan's usual attack on Anne).


Mr Russell said, "Was she scared?" and jumped out of bed and ran into the bathroom shouting at the top of his voice, "Ha, ha, my first turn for the shower!"
At that Mrs. Russell came flying in from the twins' room and began pounding on the bathroom door, yelling, "It is not your first turn!  It's mine!  You traded me your first turn yesterday for a new golf ball."
Mr. Russell laughed rudely and called out "Too bad for you.  I've got the door locked."
Mrs. Russell kicked at the door and shouted, "Cheater, cheater, cheater!"

The fights go on until the children, having learned their lesson, beg their parents to stop fighting.  All go out for ice cream.

The redeeming element of all these stories is that outrageous behavior -- by kids and adults -- is so much more entertaining than the final lesson (let's-be-good-and-share/bathe/not fight).

I look forward to seeing what your family will think of Mrs. Piggle-Wiggle.