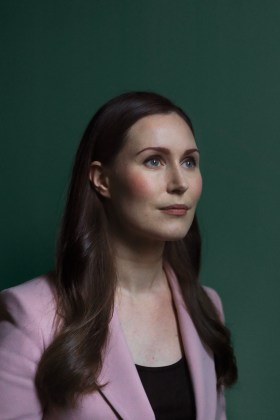 The photographer is trying to coax the Prime Minister of Finland into a three-quarter pose, with knees turned slightly to the side, hands demurely joined in her lap. But Sanna Marin isn’t having it. Just 11 days after taking office, she faces the camera squarely, legs slightly apart, and rests her hands firmly on her thighs. “This is how you would do it if I were a man,” she says.
Finland’s new leader has good reason to think about how she is portrayed. After her predecessor resigned on Dec. 3, the 34-year-old became the youngest Prime Minister in Finnish history and the world’s youngest female state leader as well. That status earned her and her coalition government (all five party leaders are women, and four are below the age of 35) global headlines. But for Marin, the focus on attributes out of her control has been more a distraction than a cause for celebration. “It’s more work,” she says of the attention. “Of course, it’s also a great opportunity for Finland to present itself, and I’m grateful for that. But I think if you focus on the issues, and not the person, it’s easier.”
Marin has been focusing on the issues for most of her adult life. Raised by her mother and her mother’s same-sex partner after her parents separated when she was very young, she didn’t grow up dreaming of being Prime Minister. “I could never have imagined that. Politicians and politics seemed very far away,” she says of her working-class upbringing. She was the first in her family to attend university, and it was only there that she developed a political conscience. “My background influenced how I see society, how I see equality between people,” she says. “But it’s not because I’m from a rainbow family that I’m in politics. I’m in politics because I thought that the older generation wasn’t doing enough about the big issues of the future. I needed to act. I couldn’t just think, It’s somebody else’s job.”

It became her job officially in 2012, when she was elected to the city council of Tampere, Finland’s third largest city. She was elected to Parliament three years later, and when her center-left Social Democrats, led by Antti Rinne, won the April 2019 election, Marin was named Transportation Minister. Then in December, after a two-week postal strike that spread to other industries, Rinne lost the support of one of his coalition partners and resigned. The party elected her to take his place.


Marin now sits atop a government in which 12 of the 19 Cabinet positions are filled by women. But in Finland, which has had female Prime Ministers twice before and ranks third in parity on the 2020 World Economic Forum’s Global Gender Gap Report, that’s not considered remarkable. “We have long been pioneers in gender equality,” the Prime Minister says of her country, which was also the first European nation to grant all women the right to vote. “So, maybe it’s not as big a deal in Finland as it would be somewhere else.”
That doesn’t mean there’s nothing left to accomplish when it comes to equality. Marin ranks closing the pay gap (Finnish women earn €0.83¢ for every €1 men earn) and persuading men to take their fair share of parental leave as key concerns. Before taking office, she also expressed support for the idea of moving the country to a four-day workweek, in order to allow parents more time with their families.
Climate change is also a central pillar of her agenda. The government she oversees has pledged to become carbon neutral by 2035. If successful, Finland would be one of the first countries in the world to achieve net-zero emissions. Traffic emissions will be cut 50% by 2030, she says, through a mix of public-transportation initiatives, subsidies for renewable fuels and the development of new technologies. “It will also create jobs and opportunities for Finland. I don’t think that fighting climate change means higher costs and a worse future. I think it’s the opposite.”
She faces a serious challenge convincing the rest of her country of that, however. Recent polls have shown her Social Democrats slipping markedly against the now leading Finns, a nationalist populist party that opposes immigration and has decried the expense of the government’s education and climate plans. “Traditional parties need to take a look in the mirror,” she says in response. “One of the reasons European countries fell into populism is how we solved the financial crisis—many people lost their jobs and their hope in the future. That is the ground where populism grows. Making decisions that help people educate themselves, that raise the well-being of individuals and families—that’s the best way to fight populism.”
A self-confessed idealist who is also “very pragmatic,” she understands that in these divisive times, simple answers and loud voices often win out. But she sees her job as building consensus rather than inflaming passions. It’s one of the things she appreciates about the Finnish way of doing things, as is her fellow citizens’ ingrained politeness. Asked whether she worries about protecting her privacy now that she is Prime Minister, she laughs. “No, because it is Finland, thank God,” she says. Every weekend she returns to her home to be with her husband and small daughter, and she says she shops at the local grocery store like anyone else. “Maybe someone will come up and say, ‘Oh, it’s so nice to meet you.’ But that’s it. I can be a normal person.”
Maybe so, but as the global media attention suggests, there are plenty who are looking to her to join the newly growing ranks of young, female role models. Yet once again, in her quiet, firm way, she rejects the label. “I don’t think it’s because of their age or gender,” she says. “Greta Thunberg is not a role model because she’s a young girl. It’s because she’s a voice for climate. She’s talking about issues, and that’s what inspires people.”
Still, Marin will admit one area where having an all-women government makes a difference. “We Finns have our sauna,” the Prime Minister says with a slight smile. “And traditionally, it’s where we make decisions. So now that we have five women in charge, we can all go to the sauna together and make the decisions there.”
TIME's Davos 2020 issue was produced in partnership with the World Economic Forum.