Betty MacDonald and The Egg and I movie 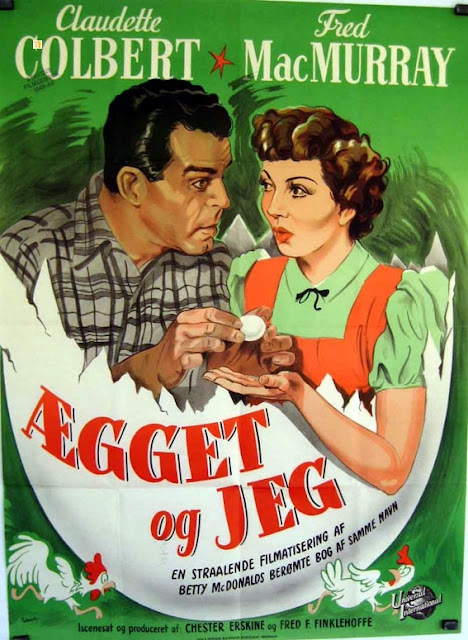 Most of us do but Bosley Crowther, the film critic of The New York Times from 1940 to 1967 and for many years one of the nation's most powerful and respected voices on the cinema wrote:


In this reviewer's opinion a good opportunity was here lost to do a delightful satire upon the movement back to the farm—or, at least, a witty dissertation upon the dirt-road bucolic life. But to judge by the girlish squeals and giggles which were heard in the audience yesterday, there are some who will find the picture adequate. Miss Colbert is sororal, we'll agree, and Mr. MacMurray is conventionally uxorial. So who are we to say them nay?

What do you think about it?

Readers of Betty MacDonald's hen-house diary, "The Egg and I," which told of her lusty experiences as a chicken farmer's wife, had better forego the expectation of finding any of the original's earthy tang in the so-called movie version of it which came to the Music Hall yesterday. For the nearest this watered-down rewrite gets to the solid soil is the dirt on the farm sets constructed on a studio soundstage. And the nearest it comes to realizing any of the diary's observation and wit is in a few farcified re-creations of some of its milder episodes.
That may be because the film's authors, Chester Erskine and Fred F. Finklehoffe, were too much intimidated by the cleanly Production Code to attempt a legitimate reflection of the racier substance of the book. But we rather have a suspicion that they were a little more concerned with making a quaint and cozy cut-up for the reliable women's trade.
As a consequence, most of the humor is artlessly derived from sure-fire situations which can be played for conventional farce. These are such things as Claudette Colbert, as a city wife moved to a farm, having her endless troubles with an incredibly perverse trick stove or falling down in the pig pen or dropping into the rain barrel off the barn roof. And most of the complicating interest is provoked in Miss Colbert's concern not for the welfare of the chickens but for the assurance of her breezy husband's love. For the resourceful Messrs. Erskine and Finklehoffe have introduced a smooth and voguish dame with a farm down the road and a bright eye for Fred MacMurray, who plays Miss Colbert's laughing spouse.
To be sure, these pattern-minded authors have got into their film the Jeeter Lesterish Kettles who were so amusing in Mrs. MacDonald's book. And, as played by Percy Kilbride and Marjorie Main and Pa and Ma and by a slue of smudge-faced children, they do contribute some bits of rustic spoof. But, mostly, they and the other rural characters which have been rung in are used for nothing more original than old-time bumpkin burlesque.
In this reviewer's opinion a good opportunity was here lost to do a delightful satire upon the movement back to the farm—or, at least, a witty dissertation upon the dirt-road bucolic life. But to judge by the girlish squeals and giggles which were heard in the audience yesterday, there are some who will find the picture adequate. Miss Colbert is sororal, we'll agree, and Mr. MacMurray is conventionally uxorial. So who are we to say them nay?
Featured in the stage revue at the Music Hall are Paul Haakon and Kathryn Lee, Robert Marshall, Boy Foy, Paul Remus and company and the corps de ballet, glee club and Rockettes.


BOSLEY CROWTHER, 27 YEARS A CRITIC OF FILMS FOR TIMES, IS DEAD AT 75


Bosley Crowther, the film critic of The New York Times from 1940 to 1967 and for many years one of the nation's most powerful and respected voices on the cinema, died of heart failure yesterday at Northern Westchester Hospital in Mount Kisco, N.Y. He was 75 years old and lived in Somers, N.Y.


In an era when television was growing up and movies were still the major cultural force in America life, Mr. Crowther was perhaps the most influential commentator in the country on the art and industry of motion pictures.


His reviews, appearing three or four times a week in The Times, and his longer analyses in the columns of the paper's Sunday drama section, were often decisive in shaping the careers and fortunes of Hollywood actors, directors and screenwriters.


Mr. Crowther, who was educated at Princeton, was the author of five books and two plays and was a member of The Times's staff for nearly 40 years. He covered a wide variety of assignments as a general reporter, feature writer and rewrite man before embarking on his 27-year career as a critic.


His reviews and articles spanned a revolutionary period in film art and film criticism - the transition from black and white to color, the internationalization of the cinema, the growth of independent film making and the coming of television.


Though his focus was primarily on Hollywood and its appeals to popular taste, Mr. Crowther was an early and enthusiastic advocate of what became a cultural boom in foreign films in the 1950's and 1960's, particularly those of Roberto Rossellini, Vittorio De Sica, Ingmar Bergman and Federico Fellini.


In the 1950's, he turned his critical spotlight on Senator Joseph R. McCarthy, the Wisconsin Republican whose anti-Communist crusade left much of Hollywood in turmoil. Mr. Crowther fought against the blacklisting of supposed Hollywood Communists and ridiculed the stridently patriotic movies of those years.


He also championed the fight against statutory censorship of motion pictures, while calling consistently for greater social responsibility, as he saw it, in the making of American movies. He frequently was critical of films that portrayed violence in what he saw as a sensationalized way. Scholarly Style of Language


Conscious of the power of his reviews, Mr. Crowther rendered his judgments in scholarly rather than breezy language and conservative rather than raffish tones. His sober, resolutely nonpoetic style conveyed wit and the talent of a good storyteller, but it reflected his own fairness and sense of responsibility toward his craft. It also gave no quarter to cacophonous critical notices by some colleagues. There was, thus, an almost official quality to his writing.


What appealed to him most were movies of social content - ''Citizen Kane,'' ''The Grapes of Wrath,'' and ''Gone With the Wind,'' for example - and he liked to remind readers in his Sunday columns that there were virtues in such films as ''The Lost Weekend,'' ''The Red Shoes'' and ''All the King's Men.''


He also defended fluffier films like ''Ben-Hur,'' ''Gigi,'' and the enormously expensive production of ''Cleopatra.'' And he denounced as ''a blending of farce with brutal killings'' the violence in the successful 1967 movie ''Bonnie and Clyde,'' which some other critics praised as an effort to convey the breakdown of moral and social values during the Depression.


Though he wrote as many as 200 film reviews and 50 longer Sunday articles each year, Mr. Crowther found time to write three books during his 27-year career as a critic, as well as two that appeared after he became critic emeritus in 1968. Wrote Book on Mayer


His books were ''The Lion's Share: the Story of an Entertainment Empire,'' a history of Metro-Goldwyn-Mayer that appeared in 1957; ''Hollywood Rajah: the Life and Times of Louis B. Mayer,'' published in 1960; ''The Great Films: Fifty Golden Years of Motion Pictures,'' a compendium of essays on selected movies, published in 1967; ''Vintage Films,'' another series of essays, in 1977, and ''Reruns,'' in 1978.


Francis Bosley Crowther Jr. was born in Lutherville, Md., on July 13, 1905, the son of F. Bosley and Eliza Leisenring Crowther. Like his father, he dropped his first name in favor of Bosley. He attended grade schools in Lutherville and high schools in Winston-Salem, N.C., and Washington, D.C., before entering Woodbury Forest School in Woodbury, Va.


A stocky man with white hair, blue eyes and a cultured voice, Mr. Crowther was a three-time president of the New York Film Critics and, in 1954, received the first award for film criticism given by the Screen Directors Guild.


Mr. Crowther counted a few actors among his close friends, but in his many appearances as a lecturer and privately among acquaintances he frequently debunked the notion that a critic's life was romantic.


''There is, I am told, a vagrant notion that all we members of the screen department do is go to movies and sit around drinking in plush cafes with voluptuous Hollywood stars,'' he said in a 1951 article for Times Talk, The Times's house organ. ''To be sure, we do go to movies. But if any invidious outsider has the notion that this is all we do, he has another notion coming.''


Mr. Crowther attended three or four movies each week, many of them early in his critical career on the occasion of their New York premiers though he, and other critics, later began attending private, pre-premier screenings as a matter of convenience. He always preferred to write his review immediately after a screening, rushing back to his office from the theater and writing against a deadline.


Mr. Crowther loved movies. He saw his last film, ''Tess,'' a week ago with his wife, the former Florence Marks, relatives said yesterday. He saw his first at the age of 5 or 6, one of the early screen programs of a film maker named Lyman B. Howe, who supplemented his pictures with sound produced from a gramaphone behind the screen.


WHITE PLAINS, Aug. 10— Florence M. Crowther, a literary agent and the widow of Bosley Crowther, former motion-picture critic of The New York Times, died of cancer Thursday at the White Plains Hospital Medical Center. She was 75 years old and lived in Somers, N.Y.


Before that she reviewed books on a freelance basis for The Times, for which also she did public relations in the early 1930's. She had also worked for CBS Inc. and NBC. During World War II she served in the Office of War Information.